First of all, on behalf of the Global Network of Religions for Children (GNRC), I would like to express my sincere gratitude for the presence of all the participants that came from all over the world, enabling us to hold the Third Forum of the GNRC here in Hiroshima. In particular, I would like to express my heartfelt gratitude once more for the outstanding support of UNESCO and UNICEF for this forum from the early states of the preparations, and for the presence here with us of Hon. Asha-Rose Migiro, Deputy Secretary-General of the United Nations, and Ms. Ann Veneman, Executive Director of the UNICEF.

At this Forum, we were able to enthusiastically discuss how religious people should tackle such crucial problems surrounding children as poverty, violence and the environment for three days. We have just adopted the Hiroshima Declaration, expressing the outcome of three day’s of deliberations. In it, we declare that the GNRC will promote “A Day of Prayer and Action for Children” as a new initiative. The main objective of the GNRC is, after all, “Prayer and Action.” We would be very grateful if all of you would support this initiative in order to make it a broad movement of global citizens for children with the support of religious leaders, UN agencies and many others.

Thanks to the support of many people, the GNRC has now marked the 8th anniversary of its founding with the successful conclusion of the Third Forum. In 2002, we made a commitment to the international community to establish the Interfaith Council on Ethics Education for Children, pledging ourselves to promoting ethics education. Now, at this forum, we have seen the first major tangible outcome of this pledge. We would like to express our heartfelt gratitude to all those related to the council for their untiring efforts and support. The council has finished its four-year term, and in this sense, we think that the GNRC has reached a milestone. Therefore, moving into a new phase for the GNRC, we would like to reshape the GNRC and further extend its network.

In order to do so, we will strengthen the activities of the regional networks and will consider holding forums in the regions, as appropriate to the situation of each region. And we will make specific contributions ourselves to the promotion of Ethics Education and the action plans adopted at this forum in cooperation with UN agencies at the local, regional and global levels. We are determined to promote the Ethics Education initiative at this time, and we will cooperate not only with UN agencies but also with the economic world to promote it, further extending the reach of our interfaith network.

In the book entitled “Ningen No Daichi: Human Land” written by Ms. Michiko Inukai, a critic on civilization, there is a story about a young volunteer’s encounter with a child in a refugee camp in Thailand. There was a child who had lost the will to live, whose hands and legs were skeleton thin. Probably, this child’s parents, brothers and sisters had all died or been separated from him. He never spoke a word, and kept staring silently at the sky, doing nothing but waiting to die, refusing all food and drink. This is when the young volunteer found him. He embraced this refugee child for 2 straight days, with only a few toilet breaks. Finally, on the third day, the child began to respond… he started to smile. In her book, Ms. Inukai writes about that scene as follows:

“This child discovered that there was a person who made much of him and that he was never a valueless person to anyone. This consciousness and recognition opened his expressionless face and heart, which had been closed like a stone.”

I believe that the heart this young volunteer had for the child should be the spirit of the Arigatou Foundation and that of the GNRC.

Finally, I would like to express my sincere appreciation to H.E. Ambassador Samuel Koo and all the members of the Forum Organizing Committee who devoted themselves to the realization of this Forum. And I would also like to express my heartfelt gratitude to all the GNRC coordinators, who have supported the development of the GNRC in each region of the world. Thank you very much.

I stand here alone as Representative of the Arigatou Foundation, but I certainly did not put on this Forum by myself. To everyone on the staff, the volunteers, everyone who worked so hard… I am so grateful. Most of all, I am grateful to the one who allowed me to be involved in this, who permitted it all to happen, my father, Rev. Takeyasu Miyamoto, Leader of Myochikai. Thank you very much. And I deeply appreciate my mother, without whose support and care I would not be here today. 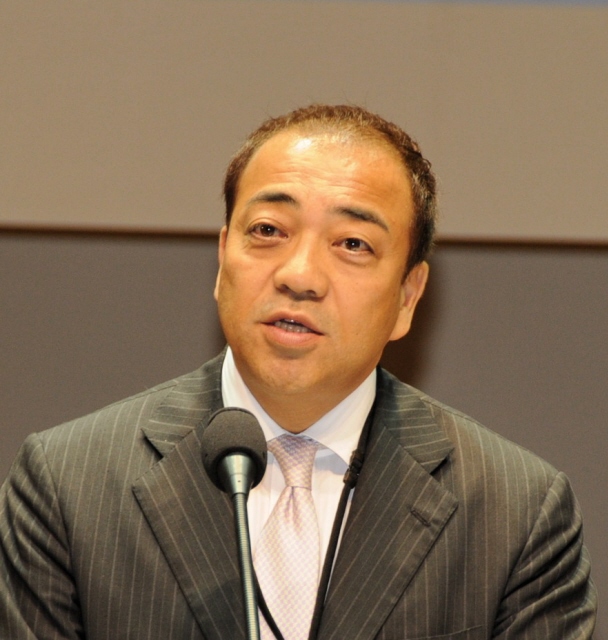