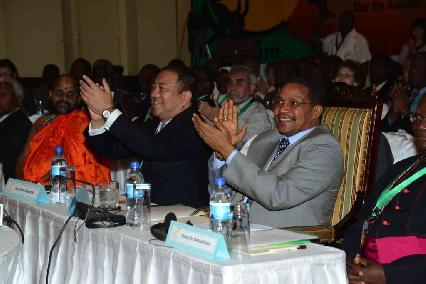 The Global Network of Religions for Children (GNRC) Fourth Forum was held June 16-18, 2012 in Dar es Salaam, Tanzania, bringing together over 400 participants from 64 different countries around the world, including about 50 children and young people, senior religious leaders and representatives from different religious constituencies – Buddhists, Bahais, Christians, Hindus, Indigenous Traditions, Jews, Muslims, Shintoists and others – UN officials and leaders from various multilateral institutions and development agencies.

His Lordship Bishop Dr. Method Kilaini, the Auxiliary Bishop of Bukoba and Co-Patron of the GNRC Fourth Forum presided over the opening Prayer for Peace, which was followed by an inspiring Documentary Video on Poverty. A diverse group of distinguished guests and eminent supporters including President Jakaya M. Kikwete of the United Republic of Tanzania, who delivered the Keynote address during the opening plenary were in attendance. They all affirmatively spoke about poverty and reiterated their commitments to improving the status of the world’s children. The young people from around the world also delivered challenging and inspiring presentations, which met with great applause from all the dignitaries and delegates in attendance. 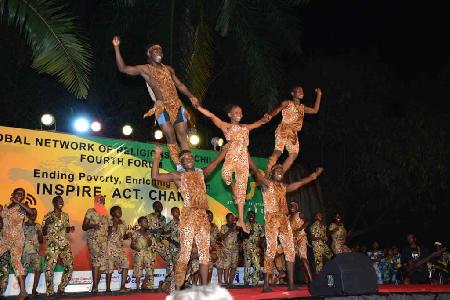 The Fourth Forum, held for the first time in Africa, came at a time when youth are leading non-violent transformations in various parts of Africa, demanding a better life, better governance and more access to opportunities, fitting the Forum’s theme of: “Ending Poverty, Enriching Children: INSPIRE. ACT. CHANGE.” It addressed issues of child poverty, its causes namely: Poor governance, War and violence and Unequal distribution of resources and how religious leaders can collaborate with other partners using their spiritual, social and moral resources to combat it.

The children in attendance took part in the Forum as full participants and attended a two day children’s pre-meeting in Dar es Salaam, prior to the Forum, which on its closing day, H.E. Ms. Dorothy Rozga, the UNICEF Representative in Tanzania and Rev. Keishi Miyamoto, the President of Arigatou International, delivered special remarks to the children, encouraging them to actively participate in the Forum.

During the opening plenary, the children made presentations to highlight the plight of children in poverty and directly appealed to leaders present to take action to ensure their fellow children lived dignified lives, free from poverty.

Participants were engaged in presentations and group sessions on three thematic areas that provided the opportunity for a renewed commitment to tackle child poverty. After the presentations they were divided into three group to discuss indepth about  the three thematic areas. Dr. Kezevino Aram, Vice Moderator Religions for Peace and Director for Shanti Ashram, Archbishop John Baptist Odama, Catholic Archbishop of Gulu and Chairperson, Uganda Episcopal Conference of the Roman Catholic Church and H.E. Sheikh Younes Aberkane, President of the Muslim Scouts Movement in France (SMF) chaired the thematic group sessions.

A panel discussion on: Reflections from Different Religious Traditions on How Poverty Affects Children was held  and chaired by the  Chief Senior Minister of the Konko Church of Izuo, H.E. Rev. Mitsuo Miyake and H.E. Rev. Dr. Samuel Kobia, Ecumenical Envoy to Sudan. This highlighted the effects of poverty on children according to the different religious teachings. Full remarks of the distinguished panelists for this session are available below:

On the evening of the third day, Rev Keishi Miyamoto hosted all participants at a dinner reception whose guest of honour was H.E. Mrs. Salma Kikwete, the first lady of United republic of Tanzania. They both called for stronger human relations and committment in eradicatig child poverty. H.E. Mrs. Salma Kikwete, declared her full support for the New GNRC Poverty Initiative.

The Report from the World Day of Prayer and Action for Children (remarks by Mr. Kul Gautam and Rev. Dr. Hans Ucko) and the Report on the Ethics Education Initiative since the Launch of Learning to Live Together: An Intercultural and Interfaith Programme for Ethics Education at the GNRC Third Forum in Hiroshima, Japan (remarks by Ms. Agneta Ucko) were presented on the third day of the Fourth Forum followed by the plenary discussion and Presentation on the GNRC Fourth Forum Declaration.

On the second and third day, regional sessions incorperating all the GNRC regional networks from Africa, Arab States, South Asia, Europe, Latin America, and Israel were held to share and reflect on the work of the GNRC in the various regions, and to develop new action plans and priorities. The regional reports and action plans are included in the comprehensive GNRC Fourth Forum Report.

Presiding over the closing ceremony was H.E. Prof. Dr. Anna Tibaijuka, Minister for Lands, Housing and Human Settlement Development, Former Under-Secretary-General of the United Nations and Executive Director of the United Nations Humans Settlements Programme (UN-HABITAT), who offered closing remarks, which were followed by an Interfaith Prayer for Peace.