In Romania, the celebration of the Day of Prayer and Action for Children was organized as a follow-up of the event from 2011, when our efforts focused on diminishing violence in schools. This year, we decided to act further, on the causes of violence affecting children. Finding adequate alternatives of education and cultivate the children’s spirituality are the biggest challenges of the parents or for the ones who are working with them.

More than 400 children, parents, pedagogues, psychologists, social workers, of different faiths, were involved in interactive activities in Bucharest, Iasi, Bistrita and Targoviste, which helped them having a deeper understanding of the violence surrounding them and motivate them to express their feelings and to define the positive education according with their real needs. The most important result was their empowerment to take attitude against violence affecting them or other children.

The promotion of the DPAC started with more than a month of preparation through Internet and in schools. In Iasi, Positive Education was the main theme discussed in pedagogical meetings of religion teachers, that took place on 10-th of November 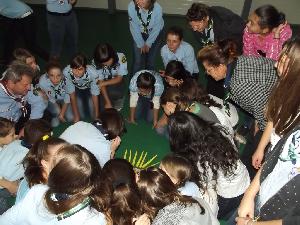 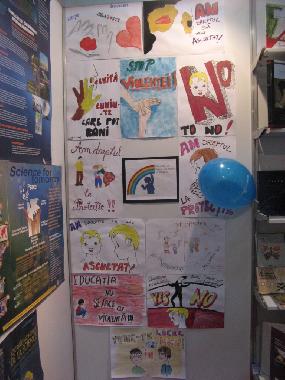 Bucharest: On the 19 November, the “Santa Macrina” Foundation organized a workshop for 30 Romanian and Roma teenagers, of different religions (Orthodox, Muslim and Adventist) and different backgrounds. During 3 hours, they discussed about their real needs and wishes and what changes they wish to see in the adults attitude. After identifying the messages that the teenagers wanted to send to the community, they organized a campaign to promote positive education through art. Their paintings-manifesto were spread on Facebook, in their schools, as well as on high-school’s websites.
This initiative was followed, on the 20th of November, by a workshop including 30 parents from socially disadvantaged families, with a big risk of abuse or neglecting. They understood that children needed stability, a positive attitude from their parents, quality time spent with them. In that way, durable and healthy relationships will be built between children and parents. Children are the indirect beneficiary of this workshop: with positive education, they will grow stronger, emotionally stabile and happy.

Similar events like in Santa Macrina were organized with the children in other 2 schools in Bucharest and in one school in Iasi. Their campaigns were expressed not only through art, but also through sport. In Iasi children send their messages writing them with their own bodies, guided by their gym teacher.

Bistrita and Lasi: The Scouts from Bistrita (N of the country) and Iasi (N-E of the country) celebrated the DPAC having their specific approach, according to the children’s age: games and drawings for the little ones, case studies and role-plays for the teenagers. The common objective to promote positive education.

Teenagers from Iasi created their own prayers for stopping the violence against children from all over the world. Fifty of them participated in the religious service organized in the Orthodox Church, where the priest spoke about Positive education. A catholic priest was also present, together with catholic and orthodox children as well as their parents. 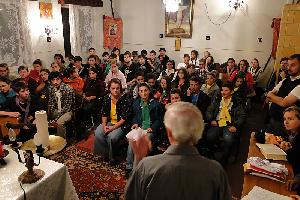 A few of their messages were:
Make the discipline with love, not with violence.
Words hurt too.
When I do a mistake I need your guidance, not punishments.
I need more encouragements and attention from you!
I have the right to be listened.
My opinion is important, too!
Give me more of your time.
The adults role is to protect, not to punish.
Don’t forget I’m just a child.
Gifts cannot replace the parents’ presence.
Don’t force me to live your dreams!
Targoviste: Leaflets based on the children’s messages were spread in  schools and in different NGO’s in Bucharest. Thanks to the National Committee of UNESCO Romania, the messages were also spread in a school as well as a high-school of Targoviste. Those materials were used as a motivation for initiating group discussions about violence and positive parenting after the theatre show “House in Fire” organized at the Cultural House of UNESCO, which approached the conflicts and lack of communication between the members of a family.
Moreover, the National Committee of UNESCO Romania , supported us, disseminating the results of our workshop and by promoting the children’s artistic messages. In this way, thousands of visitors of the GAUDEAMUS International Book & Education Fair, were impressed by the exhibition “Educate with love!”,  at the UNESCO stand, between the 23rd and 25th of November, with the children’s paintings – manifests .
BACK TO NEWS
Explore Our Global Initiatives
ARIGATOU INTERNATIONAL
ETHICS EDUCATION
PRAYER AND ACTION
END CHILD POVERTY