The World Day of Prayer and Action for Children brings people together to pray and take action for the well-being of children on Universal Children’s Day (November 20th) every year.This year too Shanti Sewa Ashram (Peace Service Centre) took the leading role with an active involvement and support from Global Network of Religions for Children (GNRC) Nepal, Youth Society for Peace (YSP), Hindu Vidyapeeth-Nepal (HVP) and UNICEF Nepal. As introductive background, Nepal is on track to achieve the Millennium Development Goal of reducing under-five mortality by two-thirds, which is a fine achievement considering the difficult political and social period the country has experienced over the last ten to fifteen years. However, neonatal mortality accounts still for 54 per cent of under-five mortality. About one in 25 ch 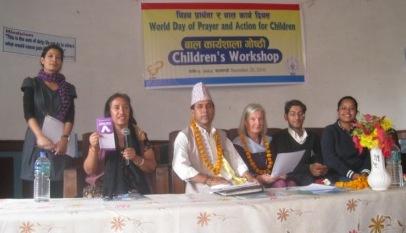 ildren die during the first month of life in Nepal. For the child that survives its first month, the following 11 months are likely to offer a number of challenges. Most deaths are the result of diarrhoea and/or acute respiratory infections. These conditions are usually exacerbated by underlying malnutrition, and poor standards of care and environmental hygiene.

Malnutrition is a serious problem in Nepal, and many children are undernourished from an early age. The early introduction of water and foods increases the risk of infections and thus contributes to malnutrition. The extremely low energy and nutrient content of the typical porridge fed to infants and inadequate frequency of feeding also contribute to malnutrition. Other nutritional problems affecting infants include anaemia and vitamin A deficiency.  Though this problem is being tackled with a national Vitamin A Programme that distributes high-dose vitamin A capsules to children aged 6– 60 months twice a year.

Another threat faced by children comes from vaccine-preventable diseases such as measles, tetanus and polio but Nepal does have a strong programme of vaccination, with a full course of routine immunization being offered to all children during their first year. An important factor in whether common childhood illnesses become life threatening to the individual child is the family’s, particularly the mother’s, knowledge of appropriate care and healthcare-seeking behaviour.

Many mothers do not recognize the early danger signs of childhood illnesses. Even if they do recognize such signs, the distance to a point of service, the cost of such a service, and its level of quality also inhibit many families from making use of available healthcare options. Only about one in five children with either diarrhoea or a ‘cough/cold’ are taken to a healthcare provider.

Finally, while the government guideline is to register all children within 35 days of birth, only a fifth of children are registered before their first birthday. This has long-term consequences for the well-being of the children, as birth registration is essential to protect the child’s right to identity and legal personality, as well as other rights. (UNICEF Nepal) 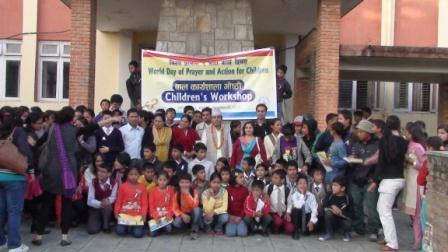 The program organized on the WDPAC occasion, included a Poetry and Art Competition addressed to the kids of Hindu Vidyapeeth-Nepal Schools and from three orphanages, with the purpose to make them aware about the Convention on Rights of Children and WDPAC. The winning students were awarded by Dr Kul Chandra Gautam (former Assistant Secretary-General of the United Nations and Deputy Executive Director of UNICEF) and Ms Gillian Mellsop (the representative from UNICEF Nepal) who attended the Inter-Religious Prayer as a chief guest and special guest respectively. Among the issues that were tackled by 40 participants in total: education, community mobilization & advocacy initiatives to reduce child mortality and improve maternal health

Another happening was the Inter- 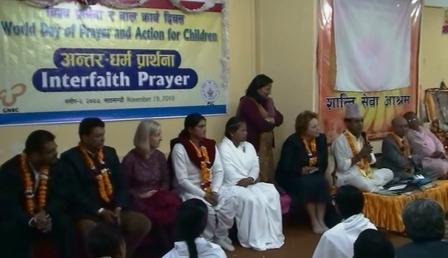 Religious Prayer – the influential leaders and the representatives from various religions (mainly Hindu, Buddhist, Islam, Christian, Jain, Sikh and Bahai) gathered in Ashram on November 16th 2010 and made a decision to make a significant video with a message on the importance of breast feeding which was technically supported by UNICEF Nepal. A huge Thanks goes to Mrs Sanju Bhattarai and Mrs Asma Shrestha Basnet who took the leading initiatives for the grand success of the program. The religious leaders also agreed to celebrate WDPAC in their own vicinity with Prayers and Actions for the children. The main seven religious representatives (Hindu, Buddhist, Islam, Christian, Jain, Sikh, Bahai) prayed for the welfare of the children. Among the issues that were tackled by representatives from various religions, adult and youths and kids from various backgrounds: education, community mobilization and advocacy initiatives to reduce child mortality and improve maternal health and learning to appreciate and respect each other through prayer.