Releasing cranes for Peace, DPAC 2013 – El SalvadorLeer en castellano…Nuevo Cuscatlán, El Salvador. In the territories of the ancient manor of Cuscatlan, now a beautiful town between mountains and coffee plantations, the GNRC-El Salvador celebrated the International Day of Prayer and Action for Children, on November 30, 2013. 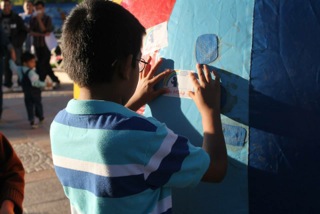 The GNRC-El Salvador celebrates this special date since 2008, with the support of various religions and social organizations.

In order to show that this is a global initiative, the participants wrote on a giant ball the names of the countries that organized DPAC celebrations in 2013. They played a fun cooperative game with the giant ball to start the celebration. 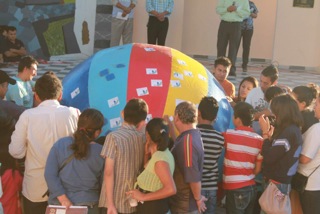 An interfaith prayer ceremony was also organized.  Father Salvador Amaya, parson of the St. Joseph Catholic Church of the Archdiocese of San Salvador, addressed the crowd, invoking the blessings for all children in need of protection in El Salvador and in the world and for the organizations that defend their rights.  The Sheikh Abderrahman Agdaou from the Salvadoran Islamic Center intoned a prayer that was very heartfelt, after which he briefly explained the initiatives of  the GNRC El Salvador to promote the Manual “Learning to Live Together.” The children of the Salvadoran Lutheran Church and of the Reformed Calvinist Church also said prayers for Peace. Then, Larry Joseph Madrigal, general coordinator of Bartolomé de las Casas Centre asked for a moment of silence to connect with children around the world, of all religions, of all ages, who are the reason for our actions. He then thanked all people of goodwill who made this beautiful event possible: the Municipality of New Cuscatlan with its municipal council and the mayor, Najib Bukele, the representatives of the different religions, the children and the young people and the promoters of the GNRC in Latin America and the Caribbean together with Arigatou International. 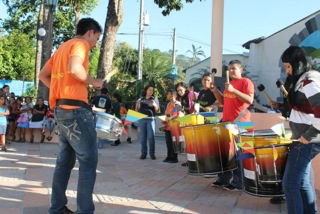 Representatives from 12 different communities participated in the event: Catholics, Reformed, Lutherans, Evangelicals, Muslims, Humanists and spiritualists. They made paper cranes as a symbol of unity and peace for the children of the world and placed them inside some balloons, one for each article of the Convention on the Rights of the Child. The articles were read one by one and then the balloons with the paper cranes were released to the world as a symbol of peace and for the promotion of human rights.

The celebration endad by sharing snacks and beverages. The ceremony was presided by Sister Carmen Diaz and the IRCES CBC team cooperated with the logistics. The GNRC El Salvador Acting Committe led the general organization of the event.

Edited and translated by: Silvia Mazzarelli