NEW ETHICS EDUCATION WORKSHOP FOR TEACHERS, YOUTH AND LEADERS OF RELIGIOUS INSTITUTIONS IN ECUADOR Leer en Castellano…A new workshop on the use of the Learning to Live Together Manual (LTLT) was succesfully held between August 2 and 4, 2013, at Camp New Life on the outskirts of QuitoThe workshop on the conceptual and methodological aspects of the manual had the following thematic framework: "Building a culture of peace in the family, the school and the community".The 26 participants included teachers and students from two educational institutions, and adults and youth representatives of the Methodist, Lutheran, and Catholic Church, and of the Bah’aí Faith. Two secondary education institutions participated: the “Benito Juarez” Institute (public and secular) and “La Providencia” College (private and religious).

The workshop based on life and faith experiences, created among the participants a space for dialogue on the different forms of violence against children and youth.
It started by identifying the following types of violence: 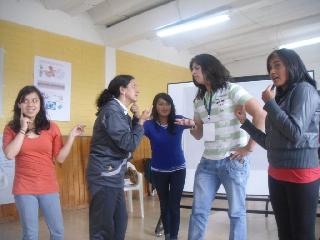 Participants identified the causes of violence and the challenges for their mission to provide comprehensive education and values:

• Lack of commitment and interest of parents and loss of their authority;
• Immature and irresponsible parents and young mothers who don’t care for their children;
• Lack of social commitment of parents who do not allow their children to participate in activities that can help them shape their values;
• New youth cultures with addictions and bigotry;
• Lack of financial resources.

During the development of Module # 1: "Understanding Self and Others", participants were introduced to Arigatou International / GNRC and the LTLT Program. The Module continued with "The Road to Understanding Self and Others”, which created among the participants an environment of trust , security and friendship, achieving a good integration of the group. It went on recognizing  diversity within the unity of the group as a sample of what occurs in real life, and the possibilities of moving towards a more fraternal society . 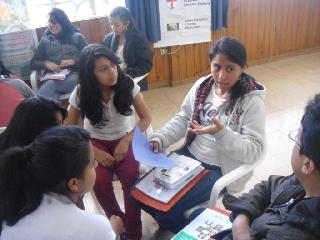 Each organization presented its identity, mission and vision, the important things that identify and define it as an institution, church or religion. Similarities and differences were valued and a common mission to work for a better world for children was sought.

The workshop followed with Module # 2, identifying the different types of violence in the everyday life of children and young people, both at home, at school and in their community. Non-violent alternatives were defined and basic principles that should guide our work were seeked, such as the participation of children, and to work together with different actors that can influence the development of children.

The symbolic walk through the various kiosks of the two LTLT modules revealed the conceptual and pedagogical framework of the program.
Participants reflected on the contents of LTLT, on Human Dignity and the 4 values of  the manual: Respect, Empathy , Reconciliation and Responsibility.
Participants also planned a workshop for children and implementations of the program within each of the institutions. 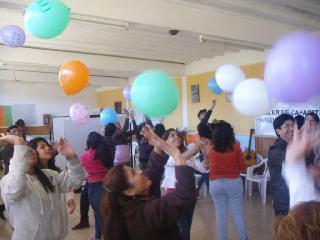 It was possible to reach agreements and partnerships among the participants and to demonstrate  commitment and enthusiasm with the GNRC and with the Ethics Education and DPAC programs.

The Ethics Education program will be implemented by using the Manual in the classrooms, through training meetings to publicize the Learning to Live Together Program, with workshops for teachers and tutors, by creating groups of young leaders and training them in the values proposed by the Manual, and promoting among them the commitment to work with religious communities. Morover, it will be implemented in churches with interactive workshops between youth and adults, by seeking cooperation from the Protestant Churches, and in different areas, including business spaces. 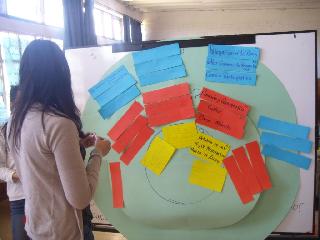 At the end of the workshop, participants expressed their joy and enthusiasm for the learning experience.

We thank all those who made the workshop possible and we put in the hands of the God of LIFE all of our thoughts, plans and dreams. We are full of hope that by joining forces we will contribute significantly to the erradication of all forms of violence against children.