Colombia: Learning to Live Together training for mothers, children and youth from San AgustÃ­n in Istmina, Colombia, focuses on violence and poverty

Colombia: Learning to Live Together training for mothers, children and youthfrom San Agustín in Istmina, Colombia, focuses on violence and povertyLeer en Castellano…Through an invitation by the Bishop of the Istmina-Tadó Diocese in Colombia, Bishop Julio García, the GNRC started a program on domestic violence and on eradicating poverty in the San Agustín neighborhood in the city of Istmina, Colombia’s Chocó region. Bishop García describes the territory of his diocese as “rich in resources with poor inhabitants.” After a visit to the region by Olga Sierra and Mercedes, the program began with a Learning to Live Together training at the San Antonio Center in Tadó City between June 26th and 30th. The training was titled, “Creating cultures of peace in the family and confronting the ethical challenge of children living in extreme poverty,” and 20 adults and 25 children and adolescents participated.

The San Agustín neighborhood is home to about 5,000 inhabitants that live amongst extreme poverty and a culture of violence. A high percentage of its population, a figure that hasn’t been able to be specified, arrived to the city as displaced peoples due to the armed conflict. The neighborhood does not have basic public services such as drinking water, a sewage system, paved roads, garbage collection, recreational centers, health centers and marketplaces. Their homes have grown closer to each other without any type of organization in order to make space for displaced families from the armed conflict. When describing their neighborhood, participants from the training expressed that there are mainly four types of violence that affect their lives: ecological violence, family violence, youth violence and discrimination. All of these forms of violence are exacerbated due to poverty and the lack of opportunities in which they live.

The main source of income for the town revolves around gold and platinum mining either because the inhabitants of San Agustín are contracted by extracting companies; because of their involvement in other services used in mining activity operations; or because they work in collecting small gold particles that the mining companies’ excavators leave behind, known for its term in Spanish, barequeo. The great majority of the population that participates in these activities are not covered by social security. In barequeo activities, mostly women and children participate. One of the participants shared: “My mom took care of us and provided for our education working hard as a barequera. Since we were kids we had to help her. We didn’t like it, it was hard, but we had to do it.”

The environmental damages throughout the entire area are immense. The act of extracting gold and platinum destroys the land for agriculture and contaminates the rivers. The San Juan River, which passes through San Agustín, receives waste from the mines and all types of waste that people contribute to it. The region is rich in water because of the high amount of rainfall, because of the presence of the river itself and because of the water received from the mountain slope; ironically it does not have drinking water. The children that participated in the training dream of the day that everyone can have drinking water in their homes. They would like to be agents of change in protecting the environment and have committed themselves to collecting garbage, to converting plastic waste into “ecological bricks,” and to holding campaigns to not throw garbage in the river.

During the learning sessions, or kiosks, proposed by the Learning to Live Together manual, the youth’s most preferred topic in the training was “non-violent alternatives.” When they explained why this was the most important issue for them, they explained that they need to use their time and energy in a positive way, but in order to do so they need education, work and space for recreation. The need to have an adequate sports field was a constant point of discussion in the training; it was considered a dream that they would like to achieve on a short-term basis. 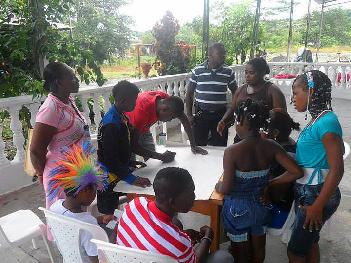 The shared feeling of being victims of discrimination among youth is profound. They stated that they are discriminated against for being of African descent, for being poor, for the reputation of violence that is attributed to San Agustín, and for the lack of opportunities in access to education and work opportunities. One of the dramatizations used in the training presented the case of a girl that entered a school in downtown Istmina. When the teacher introduced her, statements of rejection arose, indicating that students did not want to have classmates that lived in San Agustín, as they did not want violent people in their school.

Different periods of reflection on discrimination made them aware that they are not just objects of discrimination but also subjects of discrimination towards others. In the first three days of the training a youth with a disability participated that could no longer tolerate the laughter about his disability and he left the training. As the session continued, this made an impact and the same youth that contributed to the laughter identified values of respect, empathy and reconciliation in the situation, aware that they had discriminated against their peer. They decided to find him, ask for his forgiveness, include him in their activities and protect him so that he was no longer the subject of laughter. They demonstrated their desire to be agents that facilitate peace and to promote respect for the other.

The amount of violence that was detected in the family life of the participants was alarming and is encountered in different ways: physical and verbal aggression between parents and children, the pain of children and youth for witnessing their fathers abuse their mothers, teen pregnancies, alcoholism as an element present in conflict and violence especially on behalf of their fathers, fatherless homes, mothers leaving their children to be raised by others, an absolute lack of dialogue between parents and children, hunger experienced by children, and low attendance and low performance at school.

Finding pathways to overcome violence within families proved to be difficult for the children and youth. They expressed that, above all, violence comes from a male chauvinistic culture; where fathers see it as normal to abuse their wives or partners and their children, where it is normal to have relationships with several women at the same time and have several families, where they are not concerned about the material needs of their family but claim privileges, and where they waste the little money they have on alcohol, gambling and women. 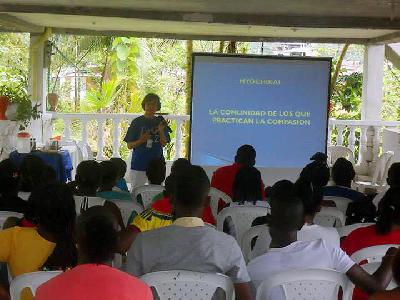 The children and youth were very explicit about the chauvinistic culture that is deeply rooted in families; a culture that has gotten to the point where youth have learned to be proud of their fathers that date multiple women. Participants considered the “wrinkled paper” activity as especially powerful and emotional. The activity made them reflect on their family’s relationship, broken and torn apart by violence and abuse; sometimes because of situations that could be resolved with a discussion, but instead cause deep emotional pain, which is not easy to overcome.

Possible solutions to this domestic violence included the need for fathers to participate in reflective and educational experiences such as those received in the training. They committed themselves to have discussions with their fathers, to deconstruct the chauvinistic culture that is transmitted through generations in their own lives, and to construct a culture of respect in the foundation of their own families.

The inter-religious discussion that took place in the training had a special impact on participants. Youth considered one of the most important moments of the training to be the “inter-religious pilgrimage” activity. With much respect and solemnity, they visited the different spaces created to share the beliefs and rituals of the different faith traditions present at the training: Jehovah’s Witnesses, three Evangelical churches (the Pan-american, Biblical and Maranatha), the Anglican Church, Methodist Church, Catholic Church, and the Buddhist tradition.

Participants of the training understand that the conditions of poverty in which they live cannot change in the short-term, but they became aware that violence and poverty violates their basic human rights, that being rich is not directly related with having possessions but rather to a quality of life, and that values and rights work together to protect human dignity. The training led to committing to concrete actions such as: improving the cleanliness and appearance of their neighborhood, the desire or determination to returning to their studies and be better students, carrying out their dream to have a sports field as a way to exercise their right to recreation, having more dialogue with their fathers in order to create change in their family’s relationships, and abandoning their own violent tendencies and attitudes. They came to understand that as children and youth, they can serve in contributing to a positive society.

The family and staff of the San Antonio Center that accompanied the training, slowly became part of it, finding its quality and content unprecedented. An employee from the center told us that from the kitchen, her and her co-workers could follow the development of the training and provided the following description of the event: “It was so neat to see how the activity explained religions. It was clear to us that all religions are valuable and in the end, they all have the same objective. Next time I will join the workshop!” At the end of the training we planted a pacay tree that was in a planter and present throughout the training; on its branches were expectations written by participants. Three children from the family that owned the center were chosen to be responsible for taking care of it.

At the end of the training, little miracles began to happen: a daughter of the owner of the San Antionio Center who was an optometrist offered to provide a free consultation to all the inhabitants of San Agustín. We expect many more miracles, but we know that the GNRC’s commitment to the inhabitants of San Agustín has just begun. We were tired at the end of the training, but left full of hope. 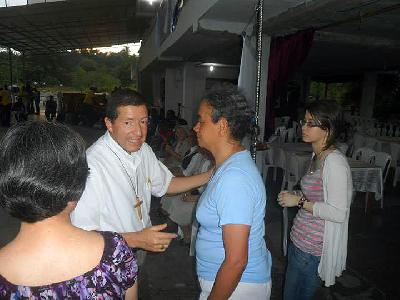 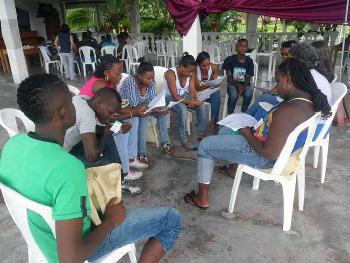 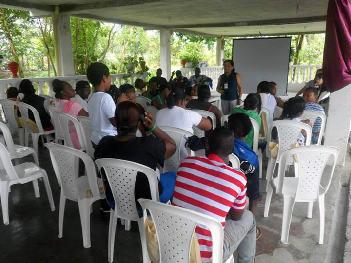 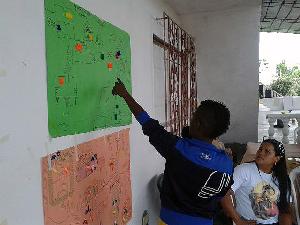 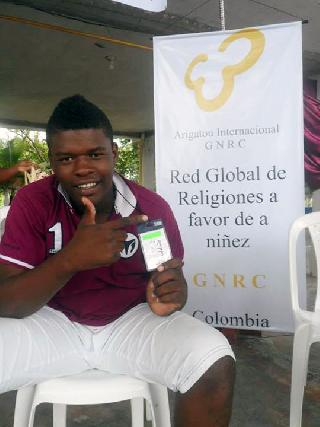 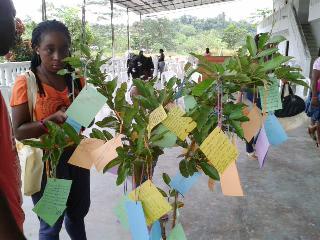 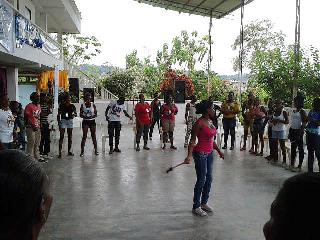 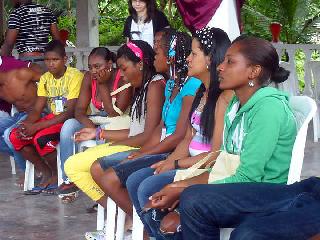 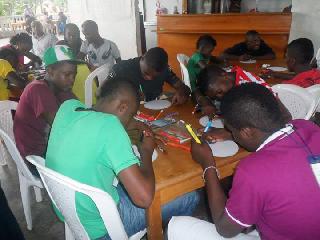