Local Workshop for Children In Preparation for the GNRC 4th Forum, Jordan, January 2012

The GNRC AS Local Workshop for Children in Preparation for the GNRC 4th Forum was organized from 19-20 January 2012. It was attended by 18 Children and youth including members of the GNRC Youth Group in Jordan and students from GNRC member schools in Amman. The participants were Muslims and Christians aged 13-16. The Workshop was held in The Ecumenical Studies Center, Amman. The two working days were facilitated by Miss. Hind Farahat with administrative help from Miss Hind Farahat. Thursday 19 January 2012

The first session started with a silent moment for prayer, as is the tradition in all GNRC AS events. Afterwards, the facilitator welcomed the participants and explained the aim of the workshop. The Program was discussed and agreed upon by the participants and they shared their learning expectations from the workshop.
To start the training, the participants had the chance to introduce themselves via a small ice-breaking activity after which they were led into a session to define and discuss poverty and its dimensions. They were presented with various pictures and were asked to pick one that expressed what they think about poverty. A discussion followed regarding the types and manifestations of poverty.

The second session was dedicated to discussing the difference between needs and wants of children while related to Child and Human Rights. The children were given a space to deepen their understanding of CRC, its articles and how it relates to various types of poverty and its dimensions. 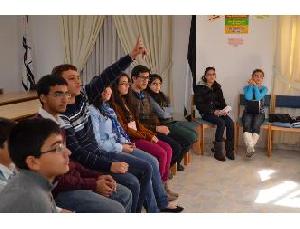 The third and final session was dedicated to discussing the first Sub-theme in the Forum: Unequal Distribution of Resources. Children were asked to recall an unjust situation they encountered or give an example of unequal distribution of recourses. Examples included:

Unequal distribution of natural recourses amongst countries and nations. 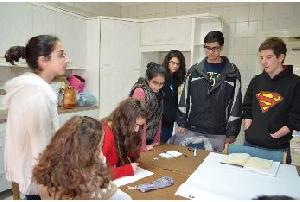 Unequal treatment by teachers in schools.
The unjust exploitation of resources by countries.
Nuclear power as an unjust risk for neighboring countries and the whole world.

Afterwards, the children were guided through the LTLT Activity “Diminishing islands” that was slightly adapted to convey the needed ideas. A discussion with inhabitants of each island followed with reflection on how empathizing and reconciliation with others and the universe could be one way to elevate poverty.

The participants touched on the global structures that widen the gap between the rich and the poor. Examples presented by the children included modern capitalism, the strategies of multi-nationals in exploiting the resources and people of certain countries while making huge profits. The day concluded with a quick oral evaluation and a moment of reflection and prayer by all present.

The second day started with a silent prayer and a moment of reflection. Three participants, Foad Sadiq, Christina Sadiq and Omar Sabbagh, presented a recap of the previous day using an activity they prepared.
The first session of the day discussed the second theme of the GNRC 4th Forum: Violence and Wars. Children were asked to share, in small groups, how they see and experience violence in their own situations and contexts. They were asked to identify the causes and results of violent situations. They presented various examples ranging from personal disagreements to conflicts between countries.
Domestic violence against children was pointed out with its relevance to families’ poverty. Moreover, the children discussed how wars can cause injustice and disasters resulting in poverty and destitution for children.

To discuss the third theme of the Forum: Bad Governance and Corruption, the participants were divided into two working groups and were given certain tasks. Both groups were asked to share their experiences and observations of bad governance. Added to that, the first group was asked to imagine what the world would be like with no corruption. The second group was asked to imagine what they would do to better the situation if they were powerful leaders in the world. 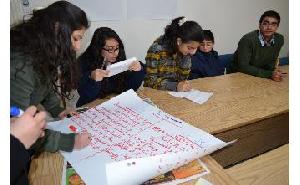 The answers from the first group were as follows:

How do you see and experience bad governance?
Injustice in treatment in schools and amongst children.
Discrimination against certain groups like the disabled in some schools and communities.
Youth in Jordan don’t enjoy equal opportunities in education and employment due to corruption and bad governance.
What adds to the effects of poor governance is the indifference of leaders when confronted. Bad governance seems to be the norm.

What would the world be like with no corruption or bad governance?
There would be justice and equal opportunities for all.
There would be no conflicts and wars.
All resources will be justly distributed amongst everyone.
Poverty will start to diminish and the gap between the rich and poor will decrease.

What do you think needs to be done to solve the problems of bad governance?
Urging people to be more spiritual and ethical in their decisions and behaviors.
There should be right upbringing for children and awareness for youth.
Enhance quality control and anticorruption measures in all fields.
Raise awareness about the importance of good governance and constructive change.
As children, we can start with ourselves by doing what’s ethical and right, as well as doing our duties to their perfection.
To be just and fair in everything.
To encourage overall economic reforms to elevate poverty and injustice.

The answers from the second group were as follows:

How do you see and experience bad governance?
Discrimination against some students in schools, especially the disabled, mostly by students, but sometimes by the systems and regulations.
Corruption and bribery in the workplace and in various establishments.
Inflation because of unjust economic systems which is contributing to child poverty.
Children and youth don’t have arenas and channels to communicate with decision makers.

How do you see the solutions?
Charity can be a short term solution for poverty. There should be programs and campaigns to provide basic needs for children and families.
Increase control measures on leaders and managements with more severe disciplinary measures.
Encourage investments and small projects to provide more work opportunities.
Establish channels for communication with the leaderships at schools like student parliament and representatives of classes.

At the end of their presentations, all participants took a moment to renew their commitment to work for justice and the wellbeing of children. They committed to start implementing what they recommended above in their communities, schools and families. The participants evaluated the workshop in terms of logistics and the content of the training. They recommended follow-up meetings and activities after the GNRC Fourth Forum.