Local Workshop for Children In Preparation for the GNRC 4th Forum, Egypt, February 2012

The GNRC AS Local Workshop for Children in Preparation for the GNRC 4th Forum was organized from 7- 9 February 2012. It was attended by 30 children and youth from various Schools and religious communities in Cairo. Participants were Muslims (Sunni), Christians (Coptic Orthodox, Arab Orthodox, Coptic Catholic, Roman Catholic, Anglicans, and Protestants). They aged 14-18 and the Workshop was held in the Church of Archangels for Arab Orthodox Community in Al-Daher Area, Cairo.Members of GNRC Egypt Committee and representatives of GNRC Organizations were present throughout the workshop, as well as board members of the Church of Archangels for Arab Orthodox Community.The three working days were facilitated by Miss Hind Farahat and Miss Rand Farahat 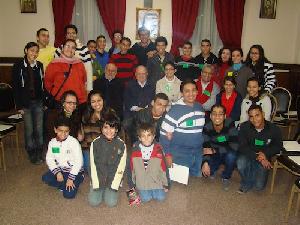 To start the training, the participants had the chance to introduce themselves via a small ice-breaking activity. A presentation about Arigatou Foundation, GNRC and the Learning to Live Together Toolkit followed.
The Participants were briefed about the plans of the GNRC Fourth Forum, its themes, and the importance of their recommendations for the growth of the Network as a whole. Everyone present at the workshop joined in suggesting and agreeing on certain rules to guide the learning and the experiences throughout the working days.

Afterwards, the participants were led into a discussion to define and discuss poverty and its dimensions. They were asked to define poverty as they see it and write their definition on a piece of paper that was provided.

The participants defined Poverty as follows (quoted and translated):
Poverty is to lack financial, social and emotional assets and resources. It’s the most important problem in Egypt. 40% of the Egyptian population is under the poverty line. 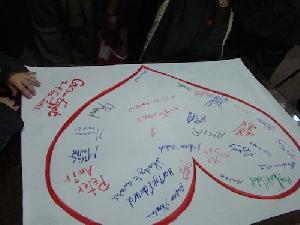 The second session was dedicated to discussing the first Sub-theme of the Fourth Forum: Unequal Distribution of Resources. The participants were guided through the LTLT Activity “Diminishing islands” with some adaptation to convey the needed ideas. A discussion with citizens of each island followed with reflection empathizing how reconciliation with others and the universe could be one way to elevate poverty. Personal resources as well as resources of the country were linked to the ideas of justice and poverty.
The participants touched on the global structures that widen the gap between the rich and the poor. They reflected on how ignorance of the other and their circumstances, and indifference to their problems can increase poverty and estrangement between peoples. The Egyptian children kept relating the ideas to the Egyptian revolution and the status in their country now. They discussed how resources are still not being equally distributed and how people are still ignorant and selfish.
They reflected on power relations between countries, groups and individuals. They expressed a very real experience with manipulation of power and leadership (Taking into account the upheavals and revolution they witnessed).
The participants were asked to join in a small evaluation exercise to monitor their learning. They used their learning logs to write about their experience during the day. The working day ended with a moment of silent prayer.

Wednesday 8 February 2012
The First session started with a silent prayer. A recap of the previous day took place, after which the discussion moved to the second theme of the GNRC Fourth Forum: Violence and Wars. Children were asked to share, in small groups, how they see and experience violence in their own contexts. Afterwards, they were divided into different small groups and asked to choose one type of conflict or violent situation. They were asked to list the causes of this conflict and its results. The outcomes of the groups were as follows:

Results:
Unemployment.
Deterioration of the economy.
Exploitation of resources.
Lack of freedoms.
Oppression and tyranny.
Ignorance and fatalism.
Worse heath services.
No standards in all fields.
Migration (forced and voluntary).
Conflicts and wars.
Lack of security and safety.
Lack of cooperation between groups, communities and individuals.
Its effect on children is great as it shapes their lives, their opportunities and rights and their future.

Solutions:
Fight poverty with charitable efforts as well as with changing the systems.
Encourage a culture of openness and respect for others.
Respect of rights and freedoms.
Encourage good citizenship and the rule of law.

Group 2: Religious Conflict
Reasons:
The kind of education and upbringing.
Lack of respect for the beliefs of others.
Lack of understanding of the core or your won religion.
Fatalism and the idea that one’s own religion is the only right way.
Lack of mutual openness and cooperation.
An overall culture and attitudes of ignorance and oppression.
Lack of knowledge about the rituals in other religions and tier meanings.
Results:
Lack of acceptance of others or anything different from who you are.
Conflicts inside the followers of each religion themselves.
Discrimination.
Lack of security and safety.
Forced migrations.
Hatred and hostility between different groups.
No mutual cooperation or joint work.
Deconstruction of free and critical thinking.
Civil wars, destructions, and death.

Group 3: Political Conflict (between the government and the people)
Reasons:
The monopoly of power and resources. Greed and selfishness.
Unjust distribution of resources as well us corruption and manipulation of power.
Ignorance, lack of good education and poverty.
Lack of respect for the authority of the people and their will.
Lack of freedoms.
No security or safety.

Results:
Upheavals and insecurity. Attacks on people and places.
The society stays oppressed with no progress.
It might lead to revolutions and from that people can regain their freedom.
Might result in more efforts to fight the bad effects of conflicts, like more cooperation between people, communities or organizations. 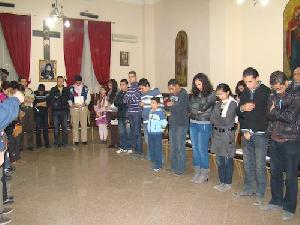 In the next session, work on the sub-themes of the Fourth Forum resumed with the Third sub-theme: Bad Governance. To discuss this issue the participants were divided into two groups. The first group was given the task to imagine a world with no corruption or bad governance. The second group was given the task of expressing what would they do if they were powerful leaders; what would they change? The third group was asked to express how they see bad governance in their context. The groups were asked to incorporate their answers into a scenario of a sketch and present it to all.
Sketches that resulted from the activity touched on the following issues:
To establish a civil democratic state.
Raise awareness about different issues.
Encourage good citizenship and equality amongst all people.
Good quality education to be free and available to all.
Training for educators and leaders to be more open, ethical and aware of the needs of the children.
Justice in the workplace and working to accomplish economic justice.
Put already existing laws and regulations into implementation. Make sure that all laws go with international declarations and treaties of Human, Child and Women Rights.
Efficient use of natural resources and exploitation of renewed recourses of energy.
Separation of powers in the country. Most importantly a separate and independent justice system.

Videos recordings of the sketches by the participants are available with the GNRC AS Secretariat.
The last session of training was used to bring participants to give their recommendations and action plans on both elevating poverty in their communities, and on their GNRC future work and organization.
First Group:
Visits to poor and unplanned districts to know more about their real life and circumstances.
Organize campaigns to gather donations for the poor.
Organize seminars and talks to raise awareness for parents and youth.
We ask for a training on various skills as a GNRC youth group in Egypt.
Work with children using games and activities to educate them about ethics and values.
Raise awareness about the bad effects of TV and Movies on the attitudes of children towards violence.
Study more about Human Rights and raise awareness about them.
Follow-up workshop for this workshop in a few months (preferably in the summer vacation).
Create a Facebook page to be connected and organize our work.

Second Group:
Create a Facebook page for the group to connect, be in touch with the regional secretariat and the GNRC as a whole.
Starting from July 2012 (Summer vacation), start regular meetings and activities. Preferably every fortnight.
Create groups in our own organizations to be teams of work for GNRC in Egypt.
Various initiatives to help the poor and gather donations.
After organizing the group, we aim to create pressure on our local leadership and government to push for child issues and rights.
Make our group more inclusive by including members of the Baha’i faith in Egypt.

After agreeing on these recommendations and plans, the participants signed their names inside a figure of a heart drawn on a sheet, to symbolize their commitment, solidarity and love for the children of Egypt.
The participants evaluated the workshop in terms of logistics and the content of the training before receiving certificates of participation from GNRC Arab States Secretariat. The Workshop ended with a silent moment of prayer by everyone present.
The GNRC AS Secretariat profusely thanks the community of the Arab Orthodox Church in Al-Daher, Cairo, and the members of the Church Board for hosting the workshop in the Church Hall free of charge.
Thanks also go to His Excellency Eng. Robert Hesni, Honorary President of the Ecumenical Studies Center, Amman, Jordan, and President of the Higher Council of the Arab Orthodox Church in Egypt. His Excellency offered the accommodation of the Regional Coordinators and the two trainers, as well as all their transportation inside Egypt, as a contribution to GNRC and its work.