Under the patronage of His Royal Highness Prince El-Hassan bin Talal, the Global Network of Religions for Children (GNRC) – Arab States, in cooperation with the Ecumenical Studies Center (ESC), held a Regional Training Workshop for Monitors on Child Rights Convention. The workshop was held at Century Hotel in Amman between 4 and 8 December 2005. The theme of the workshop is one of the main issues which GNRC is working on for children. Workshop Goals

The main goals of the Workshop were in the area of Training on Human and Child Rights according to the international covenants and conventions (a historical introduction, reading texts and analyzing them, their moral and value implications, terms and concepts, training on real cases). 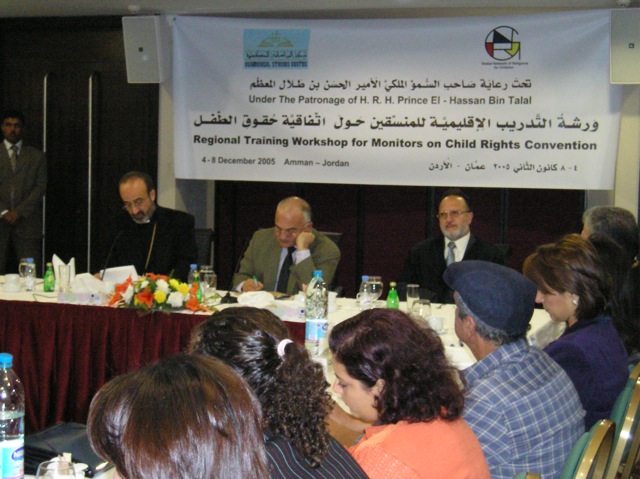 In addition, the Workshop aimed at reading the real situation of children’s life in the world, foreseeing their future, and suggesting practical mechanisms to bridge the gap between drawing up policies and practice, between theories and reality, and between values and practices. The aim was to find out the impact on rearing children and caring for them morally and behaviorally in addition to exchanging experiences and national and regional points of view among participants. The final aim was to coordinate and network the organizations participating in the workshop in order to draw up effective mechanisms and a working plan for future implementation.

The participants were divided into four working groups to discuss the following themes:
a) dialogue and acceptance of others,
b) participation and citizenship,
c) reconciliation and empathy, and
d) responsibility and belongingness. 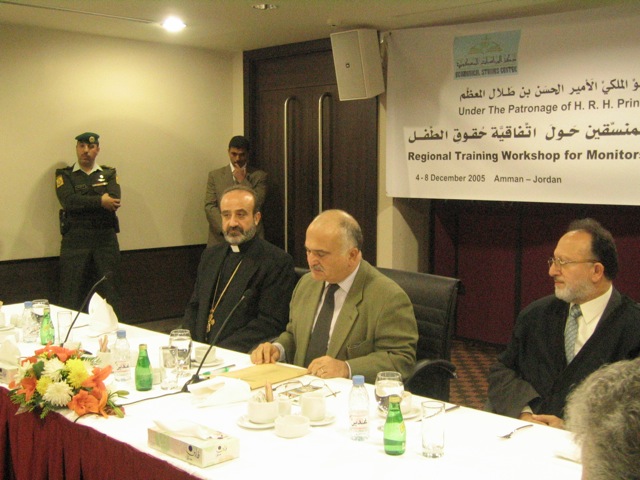 Day One
( Sunday, 4 December, 2005 )
The first session was opened Sunday evening ( 4 December 2005 ) with a prayer for the peace of children around the world. Then Archimandrite Dr. Qais Sadiq, President of ESC and Coordinator of GNRC for Arab States, welcomed the participants and gave a short talk on the establishment of the GNRC and its development. He also talked about the establishment of the Interfaith Council on Ethics Education for Children and the toolkit on ethics education for children drawn by this Council. In addition, he gave a summary of the results of the GNRC Workshop on testing the Educational Toolkit, held in Stockholm, Sweden (16 – 21 November 2005).
After the participants had discussed the agenda of the Workshop, a film prepared by a group of Indian children, on the tragedy of the city of Hiroshima, the victim of the nuclear bomb, was shown.

Session Two
Archimandrite Qais Sadiq welcomed the representative of His Royal Highness Prince El-Hassan, Patron of the Workshop, His Excellency Ambassador Hassan Abu Nimah, Advisor of His Royal Highness and Director of the Royal Institute for Interfaith Studies, and thanked him for his presence. Archimandrite Qais also asked him to convey the greetings of the participants and their gratitude to His Royal Highness for attending this workshop.
His Excellency, the representative of His Royal Highness replied with a word of thanks and reflection.
After that, the child Rand Farahat, one of the founders of the Fisher Program – Second Stage, gave a presentation entitled ” Snapshots from the World “, which was prepared specially for this Workshop. She expressed, in words and pictures, the reality of the tragic situation that the children all over the world are going through.
Following that, a reception was held for the participants in the workshop and those who were invited.

Session Three
This session started with a film showing different types of violence that children all over the world face such as wars, destruction, diseases, deformities, orphaning, displacement, child labor and exploitation in sex and wars.
After that, sources of Human and Child Rights with their legal, ethical and moral criteria were presented.

Session Four
The Preamble of the Universal Declaration of Human Rights was explained philosophically and legally. Then a humanitarian case was presented. The rights of those involved in the case were violated. After that, the participants were divided into working groups to be trained on how and what kind of practical steps of procedures should be taken in such cases. After that, each group presented its results.

Session One
After a prayer for the peace of children, the first session started by presenting the chronological historicity of the CRC, its contents and the States Parties which signed it, as well as a detailed explanation of its Preamble and the terms and concepts which it includes.

Session Two
In the second session the articles of the CRC were presented in addition to the contents of the two Optional Protocols to the CRC.
A case of a violation of child rights has been presented. The participants divided into groups to discuss this case and to analyze and specify the kind of violations according to the articles of the Convention.

Session Three
The third session started by distributing some basic documents related to international organizations specializing in human rights and child rights as well as training in child rights. Also, some basic terms and concepts used in the field of human rights were presented and discussed ( truth, duty, fairness and justice, law, convention, agreement, and protocols.)

Session Four
The fourth session started with an exercise which dealt with the concept of childhood and adolescence. The participants divided into groups to discuss these two concepts.
After that, She 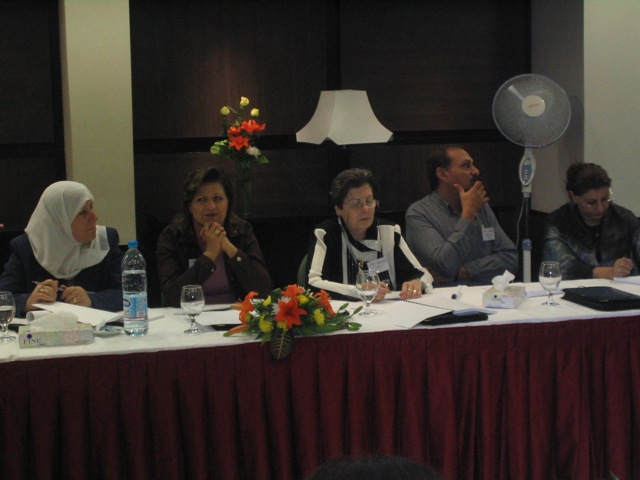 ikh Dr. Hamdi Murad gave a talk on “The Values of Human Being “ which are common in Islam and Christianity and answered some of the participants’ questions.

Day Four
( Wednesday, 7 December 2005 )
Session One
The activities of the fourth day started with the presence of His Royal Highness Prince El Hassan bin Talal who had breakfast with the participants. Archimandrite Qais Sadiq welcomed His Royal highness and said:

As the President of the Ecumenical Studies Center and the Coordinator of the GNRC for the Arab States, I am very glad and honored to convey to your Highness the greetings of Rev. Takeyasu Miyamoto, the President of Myochikai, and of Rev. Keishi Miyamoto, the Representative of Arigatou Foundation. I would like also to thank all those who contributed in covering the expenses of this workshop, especially Arigatou Foundation, Nuqul Group, and Fastlink.

“Your Royal Highness,
Ladies and Gentlemen,
This regional workshop is held to train participants on human and child rights within the framework of the GNRC. Its aim is to sharpen the skills of those working in the service of human beings: women, men, children, and young people. It contributes to the building of an international society based on respecting the humanity of man and preserving his dignity which is rooted in the image of God, the Creator.

This workshop is also held to realize your Highness great vision in launching a national program which would spread in the entire Arab world. This program will provide popular awareness in the fields of humanity and civic education. You believe in the power of people’s will to seek sustainable development by means of national belongingness and caring for people and their crucial issues, especially those related to rights and responsibilities.

The participants in this workshop represent the organizations members of the GNRC from Jordan, Sudan, Egypt, Palestine, Syria, Lebanon, and Iraq, in addition to the Jordanians involved in the National Project for Human Rights and Citizenship Education.

We all know that the subject of “Human Rights” is a concept which consists of many constituents in the field of freedom such as: expression, belief, labor, immigration, minority elections, people with special needs (physical, psychological, and mental), women, children, embryos, prisoners, etc. All of these can become principles or interests. Principles are the international citizenship of humanity while the interests are one of the images of the new colonialism.
We planned this training workshop to be distinguished from others in form and content.

Its academic part deals with philosophical, mental, moral and spiritual concepts, dimensions and terms as basic principles of the Universal Code of Human and Child Rights. Its practical part includes training on real life cases. The third part will be a space for participants to discuss in working groups four themes: dialogue and acceptance of others; participation and citizenship; reconciliation and empathy; and responsibility and belongingness. Participants in their groups will then present their recommendations and future prospective for the working plan for next year, 2006.

Your Royal Highness,
Ladies and Gentlemen,
We also believe that educating children and young people on common humanitarian principles and values is only the first step in achieving the dualism of “example and realization” or of “theory and practice”. Most countries in the United Nations which signed the international conventions on human rights are still confused about the application of this dualism. This is the problem that faces all of us who are called to be involved in the issue of human rights. How can we proximate application and example? How can we remove the gap between them? This is the area of struggle for human rights: to be able to apply the example which is theory in practical life. This requires a lot of impartiality, doing away with one’s interests, and a very big and open heart, that is his conscience. It also requires people to struggle and offer sacrifices in order to proximate example and application. We have to expect some setbacks. However, after every setback comes relief and comfort. The human rights movement is not an exception in the logic of history.
Again, I would like to thank your Highness for patronizing this workshop, wishing you good health so that you can give abundantly for the sake of humanity.”

Session Two
This session started with training exercises on self-knowledge, dialogue and accepting others and being open towards them, and coexistence and empathy.

Session Three
The third session and the two afternoon sessions were devoted to discussing the four themes: dialogue and acceptance of others; participation and citizenship; responsibility and belongingness; and reconciliation and empathy. Participants were divided into four groups. Each group was to give its report and recommendations in the first session of the next day. 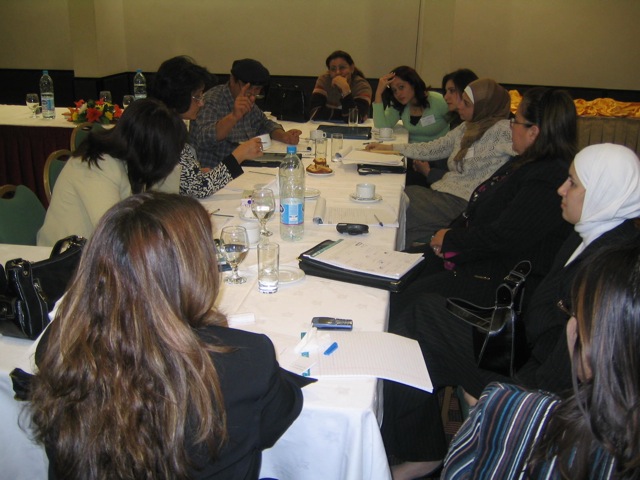 Day Five
( Thursday, 8 December 2005 )
Session One
The first session was devoted to presenting the reports and recommendations of the four groups.

Session Two
In the second session, the participants presented some activities and programs of the organizations which they represent, in addition to a general evaluation of the workshop.
In conclusion, Archimandrite Qais Sadiq thanked the participants and those who helped to implement it and hoped that there would be more meetings. Then the workshop concluded with a prayer for the peace of the world.

1. Holding a similar workshop on a yearly basis.
2. Inviting international and national organizations to intensify their efforts which aim at developing children and their welfare and providing those which care for children in the region with available experiences.
3. Strengthening networking among local, regional, and international institutions and organizations which are interested in dialogue among religions, civilizations, and cultures.
4. Encouraging studies and research related to disseminating and promoting spiritual and moral values in the framework of educational upbringing.
5. Encouraging and supporting the exchange of experiences among children and young people regionally and internationally by means of exchanging visits and holding seminars to sharpen their personal skills, as well as training and encouraging them to give, to participate, and to develop their belongingness.
6. Translating the recommendations of the workshop into French and English and publishing them as one of the experiences in the Arab region.
7. Working on following up the implementation of the workshop recommendations.