The members of the Fisher Program, GNRC Youth Group in Jordan, have launched the ‘Bag of Love’ Campaign to celebrate the World Day of Prayer and Action for Children 2010 with the support of the GNRC Arab States secretariat, The Ecumenical Studies Center, as well as their schools and families. The idea of the campaign was to gather food donations and offer them to poor families and children in Jordan. Some schools and organizations that joined the campaign distributed the donations they gathered to the poor through different channels. Part of the donations were given directly to the Fisher Pr 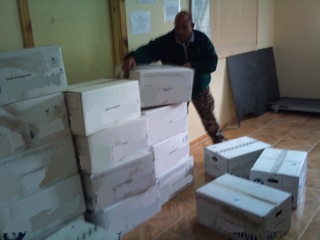 ogram members in order to be distributed. These donations mounted to 700 Kg of food, offered by families, schools and individuals. The donations have been divided into parcels and distributed in both Al-Baqaa Palestinian Refugee Camp and the Orphanage of Our Lady of the Mount Church in Ajloun, North Jordan.

On 17th December 2010, the youth group headed to Al-Baqaa Palestinian Refugee Camp where they distributed around 400 Kg of donations to 25 poor families in the camp especially, those with a lot of children.

The distribution was coordinated in collaboration with Al-Amal Society, a NGO active in the studying of poverty issues and empowering individuals and families within the Camp. The families receiving the donations were briefly introduced to the World Day significance while Al-Amal Society expressed its deep commitment to celebrating the Day in future years.

Another 300 Kg of donations were taken to the Orphanage of Our Lady of the Mount Church in Ajloun on 31st of December 2010. The Orphanage, established 4 years ago, has a number of houses accommodating 28 girls and boys aged from 7 months to 20 years. Ms. Hind Fa 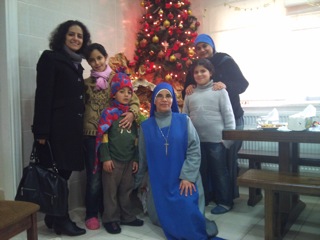 rahat, the coordinator of the Fisher Program was taken in a tour of the houses and spent time with the children there.

Plans were made for cooperation between GNRC and the Orphanage while the youth and the administration of the orphanage expressed their enthusiasm in becoming part of GNRC initiatives. Sister Alma, the nun responsible of one of the children houses confirmed the general will: “We thank you so much, we will be happy to join the work of GNRC and get the children involved. They are very active and creative!”

Al-Baqaa Palestinian Refugee Camp is the biggest Refugee camp in Jordan. It compasses 250,000 Palestinians that make it the largest gathering of Palestinian people outside Palestine.

The Church of Our Lady of the Mount in Ajloun runs under the umbrella of the Latin Catholic Church in Jordan. The orphanage accepts Christian children from all around parishes in Jordan and is totally responsible for their education, communal life, health expenses as well as their social and spiritual guidance.