GNRC celebrates the World Day of Prayer and Action for Children 2011 in Dar-es-Salaam, Tanzania

With the theme “Stop Violence against Children”, on 20th November over 2000 children gathered in prayer and action to advocate the Rights of the Child to the public through music, drama and poems.

Ahead of its counterparts in Africa, Tanzania is the first African country to launch a study on Violence against Children. Speaking on the climax day, UNICEF Country Representative, Ms. Dorothy Rozga highlighted the findings of Violence against Children in Tanzania Study and praised the Religious Leaders for publicly announcing their commitment to Stop Violence against Children in and through their Institutions.
Committed to the elimination of Violence against Children, the Guest of Honour, Ms. Mboni Mgaza Acting Director Children’s Department on behalf of the Principal Secretary of the Ministry of Community Development Gender and Children called on all stakeholders; Religious leaders, community leaders as well as NGOs to take necessary action to stop these violence that have resulted in large numbers of street children in Tanzania. She elaborated the Ministries commitment to educate children on their rights, to speak against violent act against children, to ensure the Junior Councils have an opportunity to participate in discussion on decisions that have an effect on children amongst others.

Leading to the actual day, GNRC-Africa held 3 forums in the 3 districts of Dar-es-Salaam bringing together 75 peace clubbers in each district to learn about Violence in Tanzania with regard to children and the role of the Community, Police and NGOs in ensuring the end of this Violence. Additionally, a Workshop was held with Religious leaders, Community leaders, Media and Children from both mainland Tanzania and Zanzibar. This workshop provided a unique opportunity to urge journalists to report Violence against Children in line with the Code of Ethics of Tanzania so as to avoid further damage to the child victim.
The invited journalists consisting of Television, Radio, Internet bloggers, and Newspaper journalists agreed to form a Media Network on Violence against Children as a way to bring this cruelty to an end.

Children from different schools sing the National Anthem during the climax day of Day of Prayer 20/11/2011 at Don Bosco Hall. 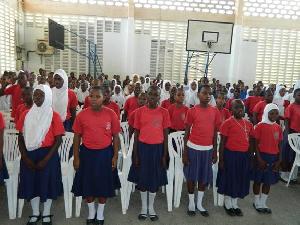 Children from different schools in Tanzania Mainland and from Unguja and Pemba of Zanizbar singing the National Anthem during  the commemoration of DPAC at Don Bosco, Dar es Saalam on 20 November 2011. 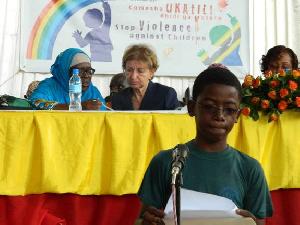 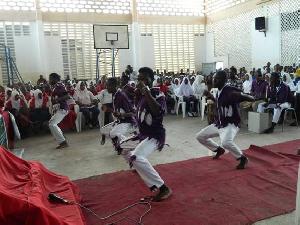 Traditional Dancing group from Dogodogo Multimedia Training Centre,  Bunju, performing a Dance Drama advocating on the theme Stop Violence against Children during the commemoration of DPAC  at Don Bosco, Dar-es-Salaam. 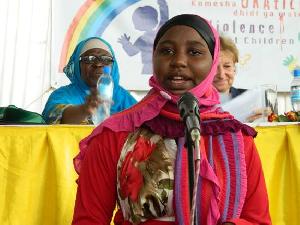 Peace Clubber from Unguja, Zanzibar, Amina Qasim presenting a Poem addressing Violence against Children during the commemoration of DPAC. 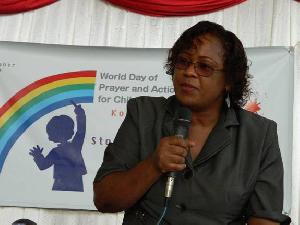 The Guest of Honour, Ms. Mboni Mgaza Acting Director, Children’s Department on behalf of the Principal Secretary from Ministry of Community Development Gender and Children, addressing the children during the commemoration of DPAC 20/11/2011 at Don Bosco, Dar es Salaam. 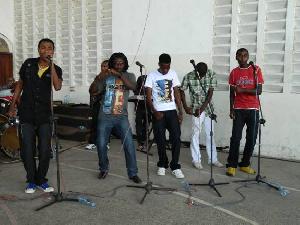 The GNRC-Africa Conscious Music Band performing one of their many newly recorded songs on Stopping Violence against Children during the Commemoration of DPAC 20November 2011.