On 21st March 2009, GNRC Africa in collaboration with SAYS- the Somaliland Association of Youth Alliance, organized a workshop in Borama, the second capital of Somaliland. The workshop held at SAYS conference hall attracted about 35 young participants from different primary and secondary schools in the city of Borama in Somaliland. 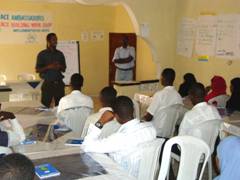 The purpose of the workshop was to sensitize children and young people on conflict, peace, peace building and the importance of accepting different cultures. Participants listed their expectations from the workshop as; to comprehend and understand the importance of peace, to know what conflict is, to learn why conflicts happen; to get some helpful skills in conflict resolution; to learn how to create a peaceful environment; to be aware of what ignites conflicts; to learn how to strengthen peace and prevent conflicts.

Once expectations were jotted down, participants also voiced their understanding of conflict as lack of understanding, conflicting interests, difference among people, confrontations, war, family and domestic problems, disagreements based on politics and management styles, lack of trust and violence. Participants said conflicts affected people’s emotions, physical body, and mental stability and needed to be managed, treated, prevented and resolved. Thus the facilitator using a participatory and an interactive learning approach, group work and presentations highlighted what was meant by peace and its importance for all communities. Conflict was illustrated as a situation that allows people to compete, hate and create violence. 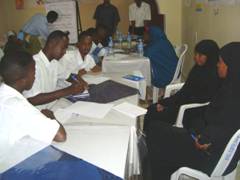 The most important session was the one comprising peer mediation. Most of the participants said that they liked this part of the workshop the most. They learnt the steps in peer mediating and to practice these steps, the facilitator requested some volunteers to play the role of a mediation team and conflicting students. There was an assumption that two students conflicted over a text book and every one of them claimed to have the right to read the book. The book belonged to the school they went. Therefore, two participants acted as mediators while they followed the four-step process of peer mediation; 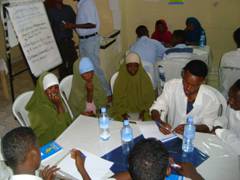 When students gained knowledge on peer mediation, the facilitator moved to other broad themes designed to help the participants understand themselves and the world. He shed light on understanding of self; others, the world, relationships, child, youth, change and other terms which assisted participants understand how people can leave together. This session was guided by the GNRC LLT Toolkit. Finally, the facilitator gave details on peace clubs, their importance and possibilities of launching strong peace clubs in their schools.

The Borama peace building workshop managed to train thirty five students on peace, conflict, peer mediation, and peace club formation and management. Students form each school formed a peace club of their own with the aim of working in the mediation and resolution of conflicts among students, establishing a culture that accepts others and encourages peace initiatives, improve school environment by tree planting, promote healthy school debates and information sharing sessions and sports activities.