Garissa celebrates the World Day of Prayer and Action for Children

Musa Mwale, a peace trainer representing GNRC, together with Mohamed Hani, a GNRC youth coordinator moderated the event which started with extensive prayers for children from both the Muslim and Christian religious leaders. About 35 children attended the occasion.
After the introductions and prayers guests were entertained with poems, songs and skits. A presentation from Imran Mohamed, a student from Garissa Secondary School narrated a touching poem entitled

“Where did we leave peace” was followed by Luqman Mohamed from County School with a song “We as brothers” . 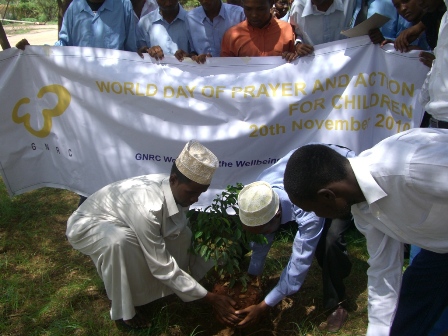 The entertainment session ended on a high note with a short skit from Young Muslim High School about the effect of the 2007 and early 2008 post election violence in Kenya which resulted in the death of about 1200 people and the internal displacement of about 30000 Kenyans most of whom were women and children. This skit married well with the theme of the DPAC which was reducing infant mortality and promoting maternal health. It was acknowledged through discussion and short presentations that brain drain (of doctors and nurses), poor infrastructure (roads, hospitals) and corruption were some of the biggest obstacles to reducing infant mortality and promoting maternal health. The participants vowed to fight all these obstacles in order to improve the health of both children and their mothers. 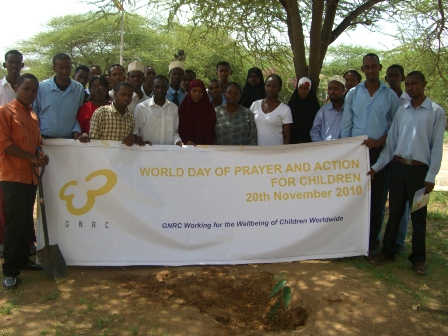 The gathering also occasioned a discussion on the recent clan and land clashes in Garissa; peace club members shared their experiences of what happened and how peace club members assisted each other by sharing information. Students and peace club members verbalized their worry and fear that the clashes which were clan based could end up in their schools and they tried to bring the students together to foster unity and peace during the disturbances.

To further consolidate the peace, the participants discussed in groups and came up with several recommendations and action points including:

A Tree planting session to conserve the environment for future children and sow the seed of the memory of 2010 DPAC was organized as the last activity. The clergy, children, students and invited guests participated in the tree planting session followed by a vote of thanks from the children to GNRC and all the organizers of DPAC who passed there gratitude and appreciation for the day. The commemorations ended with another round of interfaith prayers.