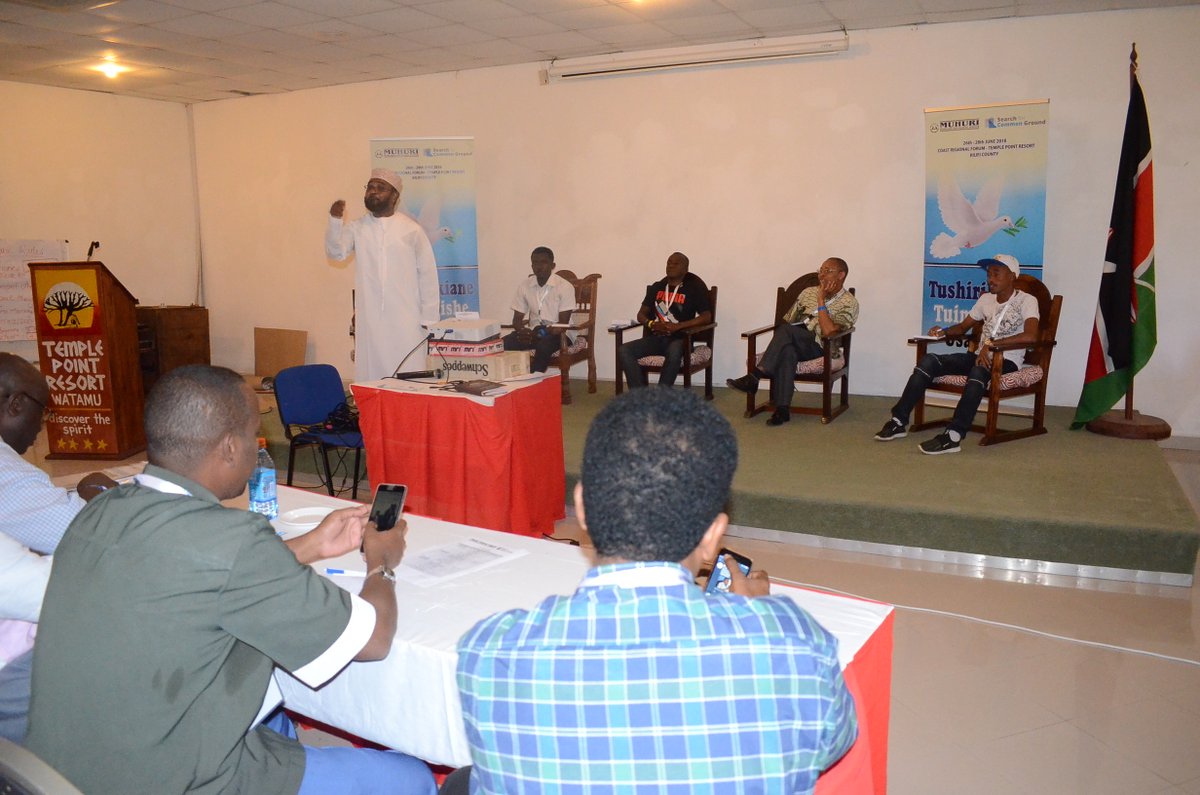 Empowerment of the Kilifi community on sustainable ways to achieve peace has always been considered critical by the residents. This prompted international and grassroots partners to organize a seminar on Strengthening Community Resilience Against Violent Extremism from 25th to 28th June 2018 in Watamu, Kenya. A total of one hundred and fifty (150) participants including community representatives, government institutions, international and grassroots organizations, security bodies and faith-based organizations attended.

In his remarks, the chairperson, Muslims for Human Rights, Mr. Khelef Khalifa, stated that violent extremism is fast becoming a major threat to peace across the world. He added that in the Eastern and Horn of Africa, more young people are being recruited into extremist groups and organizations and unfortunately, been lured into terrorism.

Surveys, researches and ethnographic studies conducted on groups like ISIS, al Shabab, Boko Haram and al Qaida, were shared with participants. The studies pointed to the challenge of the innocence and vulnerability of children and youth as easy prey for such groups.

“Understanding, preventing and countering violent extremism is difficult, often frustrating, and hard to measure their impact. These challenges are likely to be with us in the foreseeable future. It may escalate, become more intractable or much more difficult to address. All depends on the choices we make today.” – The Global Network of Religions for Children (GNRC)

Participants noted the recent sudden increase of incidences of violent extremism that have created anxiety among the peace building communities in the Eastern Africa region. More so, the tensions that accompany recurrent incidences of violent extremism where religion is misused to justify such attacks, is worrisome. It was noted that violent extremism continues to strain relations between different faith and ethnic communities by damaging and weakening the communities’ social fabric. It was thus collectively agreed that the tension, especially between Muslims and Christians caused by these attacks, and suspicions arising between faiths, can be fully addressed when faith communities are mobilized to address the challenges.

During his presentation, Dr. Othman Mujahid, who is also a GNRC Member, stressed that religious actors, their communities, women and youth have a role in modelling the peace needed in the region and children must be empowered on needs-based trainings and capacity building geared towards co-existence and respect. “The involvement of the community, specifically children and young people requires them to be responsible for their own lives and decide by themselves on the path they wish to take,” Dr. Mujahid stated.

Dr. Mujahid informed participants about the Community Resilience Against Extremism (CRAVE) Resource Guide used in the context of the Eastern Africa region. He added that the CRAVE Guide is one of the tools developed by GNRC and other dedicated peace builders to be used as an interfaith tool, to address violent extremism in the Greater Horn and Eastern Africa. The tool aims to enhance the ability of communities to prevent, address and counter violent extremism.

At the end of the four-day seminar, participants learnt about the well-researched interfaith collaboration strategies and approaches that could empower them to educate their communities and ultimately reduce and prevent violent extremism.