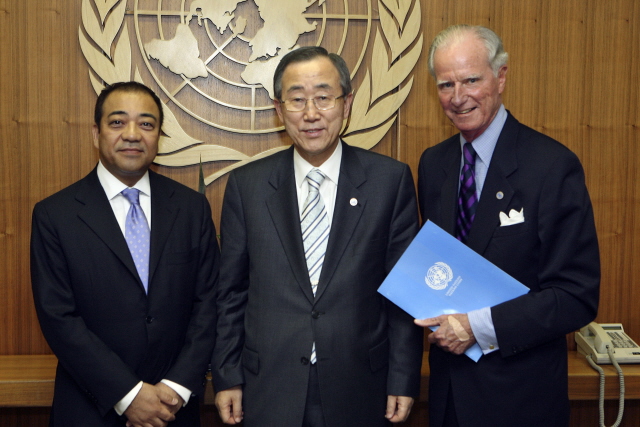 United Nations Secretary-General Ban Ki-moon has assured Rev. Keishi Miyamoto and a high-level GNRC delegation of his support for stronger ties between the GNRC and the United Nations and its agencies, in particular UNICEF and UNESCO.

In a 20-minute meeting at UN headquarters in New York on October 3, the Rev. Miyamoto and other GNRC representatives briefed the Secretary-General and his top aides on the progress achieved by the GNRC in recent years and expressed the hope that the United Nations itself would become a partner of the GNRC in its global work for children.

Rev. Miyamoto told Mr. Ban (at center in photo), “Our aim is to serve as an effective bridge between the UN system and the world’s religious leaders and their massive faith communities, when it comes to the one concern most easily shared by all humanity — the survival and well-being of our children.”

The Secretary-General welcomed this commitment and requested Under-Secretary-General Kiyotaka Akasaka, who was also present, to make the Department of Public Information the focal point for the UN’s liaison and partnership with the GNRC.

Later that day, Rev. Miyamoto and the delegation called on Mme. Asha Rose Migiro, UN Deputy Secretary General, who also warmly welcomed the initiatives of the GNRC and pledged her support in the lead-up to the GNRC Third Forum, scheduled for Hiroshima in May 2008. 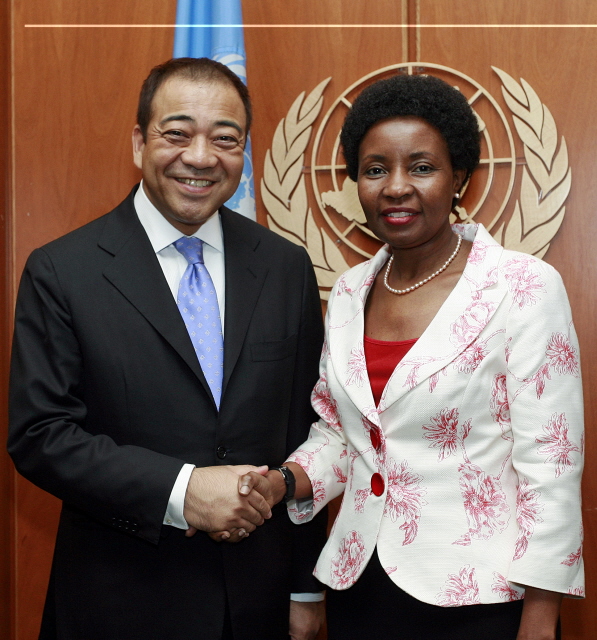 Both the Secretary-General and his Deputy were briefed on the Toolkit for Ethics Education and the UNICEF-GNRC joint study on children in world religions, the two flagship initiatives to be introduced at the Third Forum. Rev. Miyamoto assured them, “We believe the introduction of these two strategic tools will do much to further the cause of children’s rights while improving the sense of partnership that religious leaders feel with the United Nation’s commitment to the world’s children.”

After the meetings, Ambassador Koo said, “I’m confident that top officials will come to represent the United Nations and its agencies at the Third Forum.” Mr. Gautam of UNICEF and Ms. Gosselin of UNESCO also pledged their ongoing collaboration in the GNRC’s efforts to improve children’s lives and deliver the innovative new ethics education program worldwide.

Rev. Miyamoto also met with Ambassador Yukio Takasu, Permanent Representative of Japan to the UN, who expressed willingness to support the GNRC’s UN-related initiatives. On October 4 and 5, he paid working visits to UNICEF, UNESCO, the US Fund for UNICEF and others, where he met with top leadership and senior officials — including Mr. Omar Abdi, another Deputy Executive Director of UNICEF — to map out the next steps on the path to the Third Forum and beyond.

With this visit, the GNRC has taken another important step toward its goal of enlisting the broadest possible coalition in support of its unique interfaith work to make the world a better place for children.