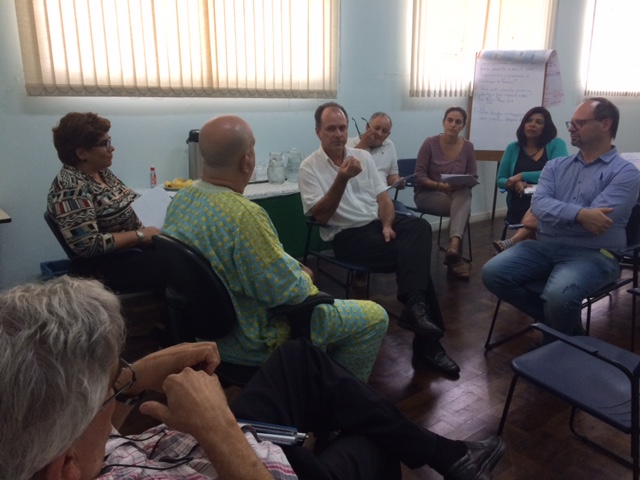 On 7th March 2018, Arigatou International Geneva and GNRC–Brazil together with Pastoral da Criança, co-organized a roundtable discussion on Strengthening Families to Nurture Values and Spirituality in Early Childhood for the Prevention of Violence Against Children. The discussion was moderated by Mr. Pai Alexandre Silveira, leader from the African Traditional Religions and GNRC Coordinator in Brazil; attended by sixty (60) participants including religious leaders, civil society and journalists from the national media. The roundtable discussion was conducted to analyze the context of violence against children, its effects on the integral development of a child and seek solutions towards addressing the problem in the country.

The meeting also aimed at mobilizing religious communities to take an active role in fostering ethical values in children’s education and generate joint action in preventing violence against children.

The roundtable discussion was followed by a meeting with members of GNRC–Brazil, which was led by the GNRC Coordinator for Latin America and the Caribbean, Ms. Silvia Mazzarelli, attended by twenty (20) participants. The main purpose of the meeting was to discuss how to strengthen the network in Brazil and to develop a concrete plan of action to follow-up to the GNRC 5th Forum, held in Panama last year.

As a step towards creating a world free of violence, members agreed to mobilize community and faith based organizations towards ending violence against children. This will be done by empowering them with knowledge, creating awareness on the vice and offering financial support where possible. Faith institutions have a large following and GNRC can utilize faith spaces to address violence against children.

Members stated that every human being has a moral responsibility to ensure children live freely. Each community stakeholder should protect a child from exploitation or abuse, because a child does not just belong to the parent but to the entire community. Participants were urged to support the family because it is the first school of a child; and if a child receives proper education and care from an early age, he will grow up to be a responsible adult.

“Both faith institutions and the family possess unique opportunities to nurture children in a protective and safe environment. This can be achieved by building a relationship of love, respect and unity with the child, done in a firm and non-violent way,” Ms. Mazzarelli stated. She added that the society also has a duty to protect and promote healthy spaces for the child’s growth.

The Panama Declaration on Ending Violence Against Children was shared during the meeting as a successful outcome of the GNRC 5th Forum. Participants committed to disseminate the Panama Declaration to faith based communities in Brazil and to develop a plan to monitor the implementation of its 10 commitments to end violence against children.

Members concluded that they have a role in promoting universal peace and eradicating poverty as contained in the 2030 Sustainable Development Agenda. The partnership between Pastoral da Criança and Arigatou International, GNRC in Brazil will strengthen the community’s resilience towards ending violence against children.