Leaders Commit to End Violence Against Children in the Middle East 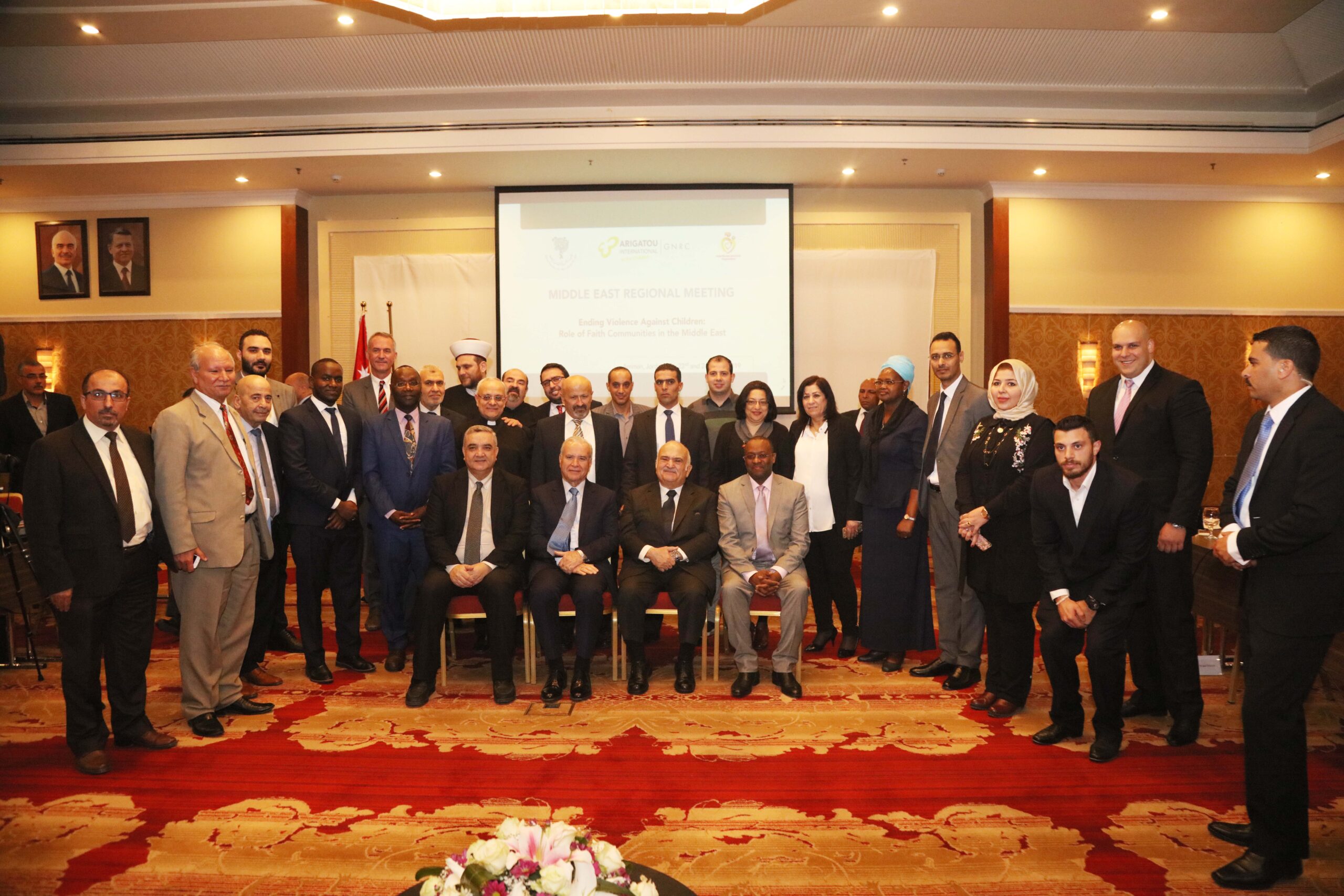 Under the patronage of HRH Prince El Hassan bin Talal of the Hashemite Kingdom of Jordan, the Global Network of Religions for Children (GNRC), Royal Institute for Inter-Faith Studies and Arab Woman and Child for Training and Development Organization organized the second Middle East Regional Meeting on 23rd and 24th April 2019 in Amman, Jordan under the theme, “Ending Violence Against Children: Role of Faith Communities in the Middle East.”

The aim of the regional meeting was to analyze the state of children in relation to different forms of violence against children in the Middle East, with an aim to take possible action. The meeting also built momentum to implement targeted commitments arising from the GNRC 5th Forum; and strengthened the GNRC network and cooperation within the region.

In his official opening address, HRH Prince El Hassan bin Talal called on the world religious and spiritual communities to help put an end to the atrocities meted on children and youth in the Middle East and the rest of the world. Through faith inspired efforts, he noted that the troubles against the young can end and Middle East region can realize peace and sustainable development. “The emergence of violence across the world calls for religious and humanitarian support to recognize and adopt human values and dignity. There is hope in Ending Violence Against Children,” he stated.

Prince El Hassan emphasized on the power of divine partnership to end child poverty, which is a form of violence against children. He gave the example of utilizing Zakaat by Muslims to eradicate global poverty. He maintained that if Zakaat is observed to the letter then nations would end poverty and focus their efforts on development. “Zakaat in Islam has the potential to enhance sustainability in a society and enable the people to overcome global poverty and embrace development,” he added.

The message from Rev. Keishi Miyamoto, President of Arigatou International, read by Dr. Mustafa Y. Ali, Secretary General, GNRC, expressed heartfelt appreciation to His Royal Highness and the participants at the regional meeting for their commitment to building a better future for the children of the Middle East and the world. Rev. Miyamoto called on faith leaders to bring about significant change by addressing the serious challenge of violence against children across the region. He reaffirmed Arigatou International’s commitment to working with a wide range of partners to protect children from violence and foster their well-being by promoting the Convention on the Rights of the Child.

Scholars from professional and faith societies including one Dr. Mohammed Abdel Fadeel of al-Azhar University also facilitated the meeting. In his presentation, Dr. Abdel Fadeel looked into Islamic Jurisprudence as a solution to ending violence against children and protecting families. “We cannot distance ourselves from the umbrella of religion because it governs us. If followed effectively, religion has the power to end violence against women and children and restore development,” he stated.

Discussions during the regional meeting were guided by the Panama Declaration on Ending Violence Against Children made during the GNRC 5th Forum in May 2017, the Sustainable Development Goals (SDGs), the Regional Action Plan and the GNRC 2019/20 country plans. Participants also benefitted from expert knowledge and practitioner experience on preventive ways to end violence against children. Open plenary and question and answer dialogue sessions were employed to catalyse thoughts towards action on ending child violence. The views and observations of the participants will be consolidated in the final synthesis report.

GNRC Members in the Middle East region concluded the 2019 Regional Meeting with a commitment to strengthen cooperation and partnerships among stakeholders including faith communities and strategic players at local, national, regional and global levels to reinvigorate and inspire a vision of a peaceful world for all youth and children.