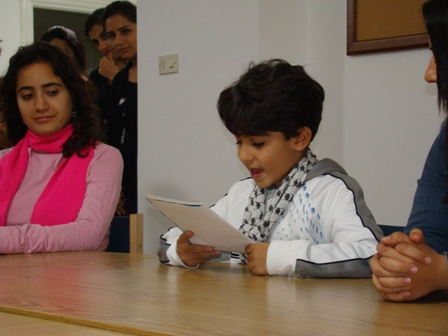 To counter the trend of the abuse of religion, which is harmful to children, and to energize all religions by putting into practice their highest principles of care and protection for children, The Global Network of Religions for Children (GNRC), in its Third Forum, proposed to have a designated day once a year when all the religions of the World will – in unison – rededicate themselves to promoting the well-being of children as their sacred duty. They would do so through both prayers and visible, tangible, measurable actions, in all places of worship in all communities of the World.

It was proposed that the 20th November, the anniversary of the most universally embraced human rights treaty – the Convention on the Rights of the Child – be designated as the Day of Prayer and Action for Children by the World’s Religions.

On that day, all over the World, in every community, prayer services will be held in all places of worship with a common theme that relates to the well-being of children and protection of their rights. These prayers will include both events held by particular religious communities, as well as interfaith liturgies where people from different faiths come together to pray and recommit themselves to working for children’s well-being. The prayer services will give people of faith opportunities to celebrate the gifts that children bring into their local communities and into the World; to reflect on the various ways in which they have failed to bring dignity to children; to explore ways of being more effective in fulfilling their responsibilities in relation to children; and to strengthen their ability to listen and work in partnership with children to build communities characterized by respect and understanding. 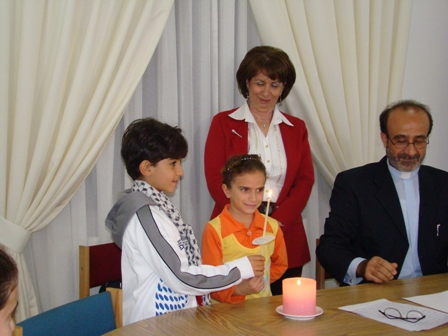 The Ecumenical Studies Center (ESC), in its participation in this day had arranged for an Evening of Prayer in its premises on the 20th November 2008. Members of the Fisher Program, Baby-Fisher Program and Youth Across Borders Program were invited along with their families and friends. Moreover, the members of the Orthodox Youth Fellowship (OYF) were present along with some friends of the Center.

The meeting started with a small welcoming speech by Rev. Dr. Qais Sadiq, the President of the ESC and the GNRC Arab States Co-ordinator, in which he introduced the GNRC goals and the GNRC Arab States regional activities since the Maryknoll meeting, USA ( 11-14 May 2002 ). In addition, he emphasised on the active participation of the Fisher Program together with the children of the region in expanding the GNRC mission at all levels: locally, regionally and globally.

After that, Ms. Riham Kawar, GNRC Arab States member, gave a speech introducing this day of prayer and talking about how it came to be proposed and the vision that led to it. Follows is the speech as it was presented:

“We gather today, the 20th October 2008, as followers of different religions and traditions as also all around the world do, to pray for the great blessing we have received on earth; Children. Childhood is considered sacred and needs special protection by all religions of the World. From generation to generation, and throughout history, the religious leaders have been and are still considered protectors and guardians of the weak, the oppressed, and the vulnerable, and the apostles of virtue and good deeds. Therefore, they are, without doubt, the best who can lead this mission.

The initiative of The Day of Prayer and Action for Children by the World’s Religions is the fruit of the recommendations of the Third Forum of the Global Network of Religions for Children (GRNC) held in Hiroshima, Japan, between 24 – 26 May 2008. There the GNRC members, a number of religious leaders from all religions, educators, various professionals, youth and children from 63 countries, as well as representatives of UNISCO and UNICEF agreed on initiating an International Day of Prayer and Action for Children by all communities and religions. The proposed date which is the 20th October of each year came after careful consideration as it is the anniversary of the most universally embraced human rights treaty – the Convention on the Rights of the Child.

An initial formulation of the “Objective” of the Day of Prayer and Action is to encourage all religions and faith-based groups to join in A Day of Prayer and Action for Children in every house of worship in all communities, to protect the rights and promote the well-being of children, both through prayers and practical actions, and to help achieve internationally agreed development goals for children.

Through this initiative, The GNRC re-confirms its key role and responsibility in guarding the rights of children all over the World and creating generations which are well educated and nurtured physically, spiritually, and socially.

This prayer will give us, and all the followers of different religions and traditions a chance to celebrate the talents and gifts children bring to their communities and to reflect on how to fulfil our duties towards children and work with them, hand in hand, to create communities and societies where respect and peace prevail and which work to safe-guard the dignity of children and humanity. 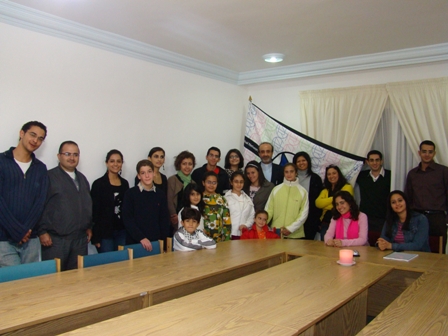 Let us, today, renew our commitment to children in the Arab World by expanding and supporting the activities and projects of our GNRC and following our spiritual and ethical values to enroot hope in peace, create foundations of peace and reconciliation in the Arab World and empower children to achieve their potential through participation and leadership.
Let us tell the World that religions can be and will be a factor of solidarity, unity, and understanding because every prayer holds the promise of good work”.

Afterwards, His reverence read aloud the Preamble of The Child Rights Convention reminding everyone present of their responsibility to work and pray for a “World Fit for Children”.

As a continuation of our commitments and promises to the children, the two youngest children of the Baby-Fisher Program lit “The Candle” which was lit first at the GNRC meeting held in Maryknoll in May 2002, and at the preparatory meeting of the youth meeting of GNRC Second Forum, Loppiano, Florence, Italy ( 27 – 29 Feb. 2004).

After that, the members of The Baby-Fisher and The Fisher Program presented small prayers, each according to their religion and beliefs and in their own traditions, in solidarity with the children of the World. The children who participated were:

The meeting was closed with Rev. Sadiq’s presenting a prayer for children all over the World and their families and communities.