On the weekend of January 19-20, 2007, GNRC-Israel welcomed the participants of its youth group, who will be meeting regularly once every month for the next five months. 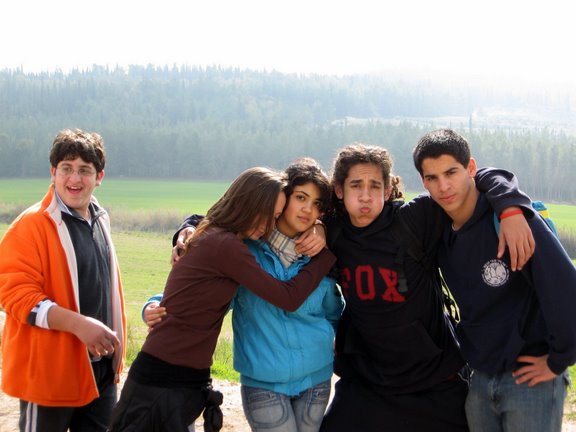 It was a sunny day in the “Oasis of Peace” – the village of Neve Shalom (Hebrew) ~ Wahat al-Salam (Arabic),  which is shortened below to NSWAS.

The group of eighteen participants (three more will probably join next time) gathered in the building of the PluralisticSpiritualCenter of the community where they met each other and their two facilitators.

The program seeks to develop in these young adults an awareness to the complexity of relations between Jews and Arabs in Israel.  It will attempt to give them tools to develop their ability to take responsibility for their futures, and to work for a more just and peaceful reality in Israel. To accomplish these objectives, we will engage in a process of interfaith learning, ethics education and dialogue.

Each seminar will take place in a different location, with a connection between the theme of the seminar and the location. The location of the first seminar, in Neve Shalom ~ Wahat al-Salam, expressed the massage of the possibility to live together out of choice and with full respect for the national and religious identity of the other people.

The meetings will be conducted simultaneously in Arabic and Hebrew, according to the language skills of the participants and thanks to the fact that both of the facilitators can understand and express themselves in both languages.

On Friday evening, time was set aside for informal social activities, including a dance party.  One of the participants, Omer Shuster, arranged the music, and the youth club of NSWAS provided a comfortable venue for the party.

Saturday morning was dedicated to introducing them to a spiritual exercise in deep listening and self-awareness. Dorit Shippin, a long time member of  NSWAS and coordinator of the community’s Spiritual Centre, introduced the idea of silence and its connection with listening, self-understanding, understanding others, and peace. The exercise included a silent walk and a sitting session in the house of silence (Beit Doumia / Beit Sakinah) adjacent to the Spiritual Center Building.

In the second part of the morning we made a walking tour of NSWAS and then hiked through the fields to visit some sites of historical and religious interest.  In the valley, we visited the Abbey of Latroun, where some twenty Trappist monks live a life of silence and prayer.  NSWAS was established upon lands originally leased from this Abbey.  More recently, thanks to the good will of the abbot, Father Paul Saouma, and the Abbey’s generosity, a large portion of the leased land was gifted to the village.  We all entered the church together. The Christians in the group felt comfortable while the others found this to be a new and strange experience. A Jewish participant inquired about the garb of the monks. From the Abbey, we continued to the next site – the ancient Christian holy site of Emmaus, which is cared for today by a resident lay and monastic Roman Catholic community.

We learned that this site, like many others in our homeland, has a history in which Judaic, Christian and Islamic elements are interwoven.  There are Second Temple period Jewish tombs, Roman baths, early and crusader period Christian churches, and a Muslim cemetery.  From a resident monk, who also has considerable knowledge of archeology, we learned more about the site’s history, and particularly the Christian interest in it, since it is a leading candidate for the location of a key New Testament story.  The story states that, in Emmaus, Jesus re-appeared before his disciples after his crucifixion.  Later, we spoke of the more recent history of the place.  The area was the site of the large Palestinian village called Imwas, which, together with the villages of Yalu & Beit Nuba, was completely demolished by the Israeli army from the second day of the 1967 war (also known as the Six Day War), its inhabitants expelled and deported.

The afternoon was dedicated to lunch and rest, followed by a concluding session.  There, the members of the group expressed their satisfaction with the program and their enjoyment with each others’ company.  Their experiences,together will be the basis for more discussions in the future meetings, around the questions of identity, religion, spirituality, respect for the other, war, peace and reconciliation.

The next meeting will take place on February 16-17, in the city of Jaffa, by the Mediterranean Sea.