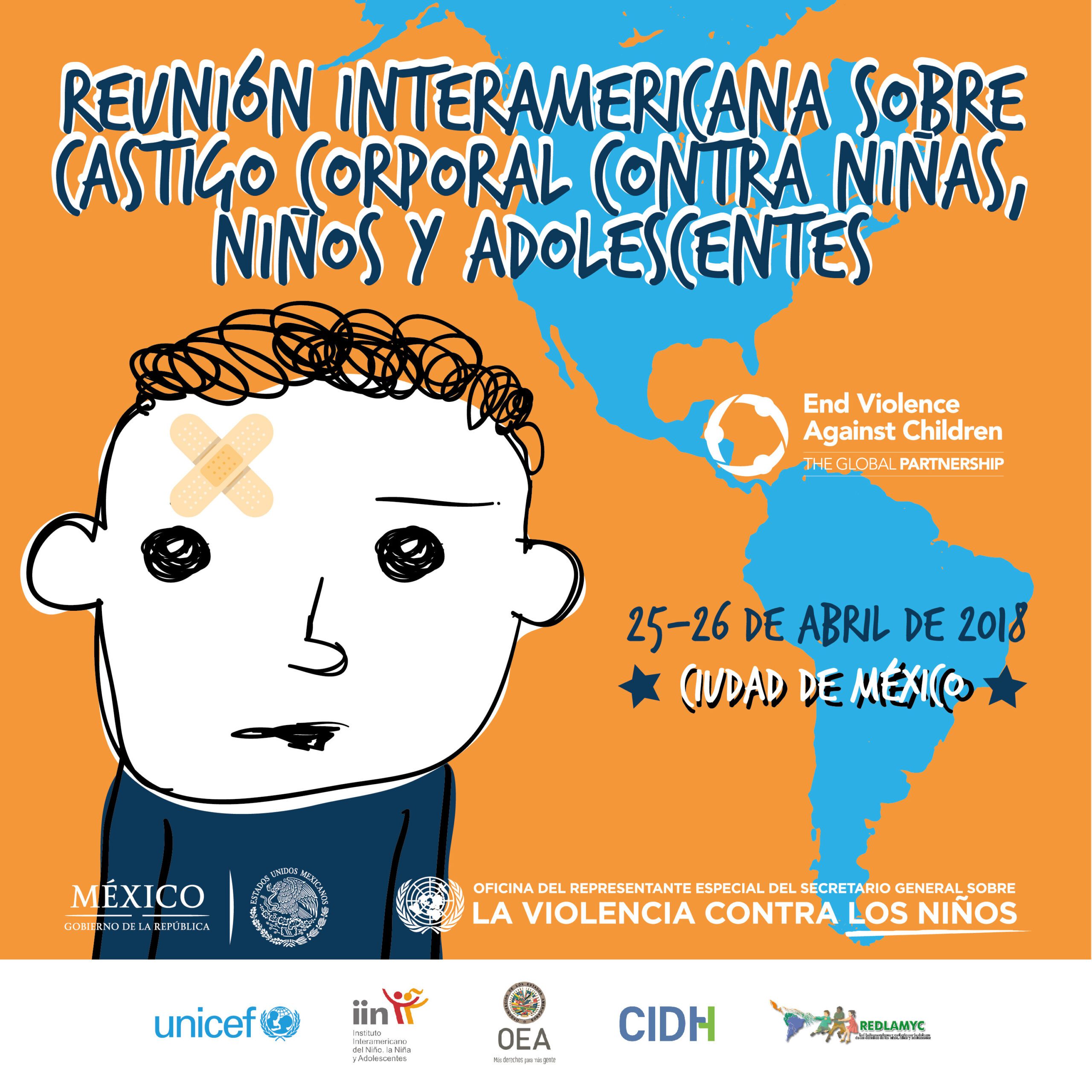 Corporal punishment is a widespread phenomenon in the region with a direct impact on the physical, psychological and emotional wellbeing of children. Nearly 176 million children and adolescents are affected and in turn, replicate these forms of violence in their daily lives. So far, ten (10) countries in the Latin American and Caribbean (LAC) region prohibit physical and psychological punishment in all contexts, including within families. To further strengthen the response, the Government of Mexico organized the Inter-American Meeting on Corporal Punishment of Children on 25th and 26th April 2018 in Mexico City, to analyze and understand the current situation and the progress made to eliminate corporal punishment of children in the region. The government worked in collaboration with the Inter-American Commission on Human Rights (IACHR) and other entities such as the Special Representative of the Secretary General on Violence against Children (SRSG-VAC), the Inter-American Children’s Institute (IIN), the United Nations Children’s Fund (UNICEF), and the Latin American and Caribbean Network for Children and Adolescents’ Rights (REDLAMYC).

The objective of the meeting was to compare national policies and identify good practices and measures that have demonstrated success in reducing corporal punishment of children. The meeting also sought to identify the main and common challenges in the region.

The meeting resolved to be guided by the definition of corporal punishment as per international human rights instruments, which allow for the identification of violent behaviors affecting children in different social and cultural contexts. Thus, the definition elaborated by the Inter-American Children’s Institute (IIN), was adopted, as it was deemed most complete and comprehensive. The meeting proposed that all states use it.

The need for cooperation among community stakeholders in eliminating violent practices was stressed, particularly the normative dimension, programmatic dimension and cultural dimensions. Ms. Martínez, presented GNRC’s work in the Dominican Republic in relation to the normative dimension, to influence religious leaders to support legal prohibition of corporal punishment in all settings.

“Although there is a strong political will to review the law, it is necessary to prepare the society to accept this cultural change. In fact, a draft law is being worked on, but for it to be well received in the Congress, there must be a good acceptance and support from the most powerful and influential sectors of the Dominican society. One of these is, undoubtedly, the religious sector, which has a great influence on decision makers and the public opinion.” – Ms. Ingrid Martínez, Member GNRC–Dominican Republic and representative of the Church of Jesus Christ of the Latter Day Saints.

Ms. Martínez highlighted the importance of strengthening families, as they are first and foremost important circle for child protection. In this sense, she described some concrete good practices that the Church of Jesus Christ of the Latter Day Saints is implementing in order to give children the opportunity to grow up in strong, healthy and safe families. “Each Monday evening, all members of the Church celebrate the Family Evening, which is a time to study together the gospel, play, share ideas and concerns, and have fun together. This moment strengthens spirituality within the home and increases unity and love among family members.” Ms. Martínez explained.

Mr. De Souza said that the cultural dimension of corporal punishment is probably the most important as it can influence the success and effectiveness of normative changes and the implementation of public policies. At the end of the Inter-American meeting, all participants adopted a Declaration which recognizes that, in order to prevent violence against children, it is fundamental to consolidate comprehensive child protection systems and promote multi-sectorial and multi-stakeholder actions, coordinated and supported by adequate and sufficient resources, from early childhood, through adolescence and up to the transition to adulthood. This requires sustained investment in childhood, prioritizing support for the family and the promotion of positive parenting.

Therefore, it is very important to work with religious and spiritual leaders on the transformation of violent social and cultural practices that justify corporal punishment as a form of discipline. Mr. Silveira also highlighted GNRC’s work in Brazil which focuses on the follow-up of the GNRC 5th Forum held in Panama in 2017, and particularly the 10 commitments of the Panama Declaration on Ending Violence Against Children.

At the end of the Inter-American meeting, all participants adopted a Declaration that recognizes that, in order to prevent violence against children, it is fundamental to consolidate comprehensive child protection systems and promote multi-sectorial and multi-stakeholder actions, coordinated and supported by adequate and sufficient resources, from early childhood, through adolescence and up to the transition to adulthood. This requires sustained investment in childhood, prioritizing support for the family and the promotion of positive parenting.

The results of the Inter-American Meeting will be presented in Malta at the High Level Global Conference on the Universal Prohibition of Corporal Punishment, to be held in June 2018. 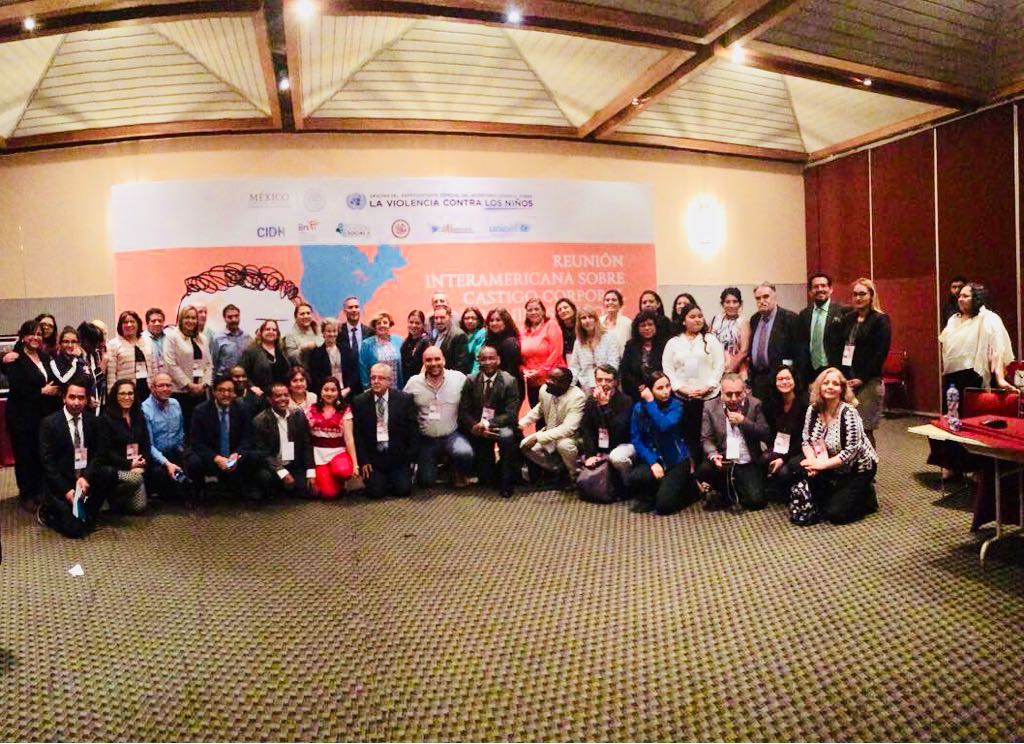