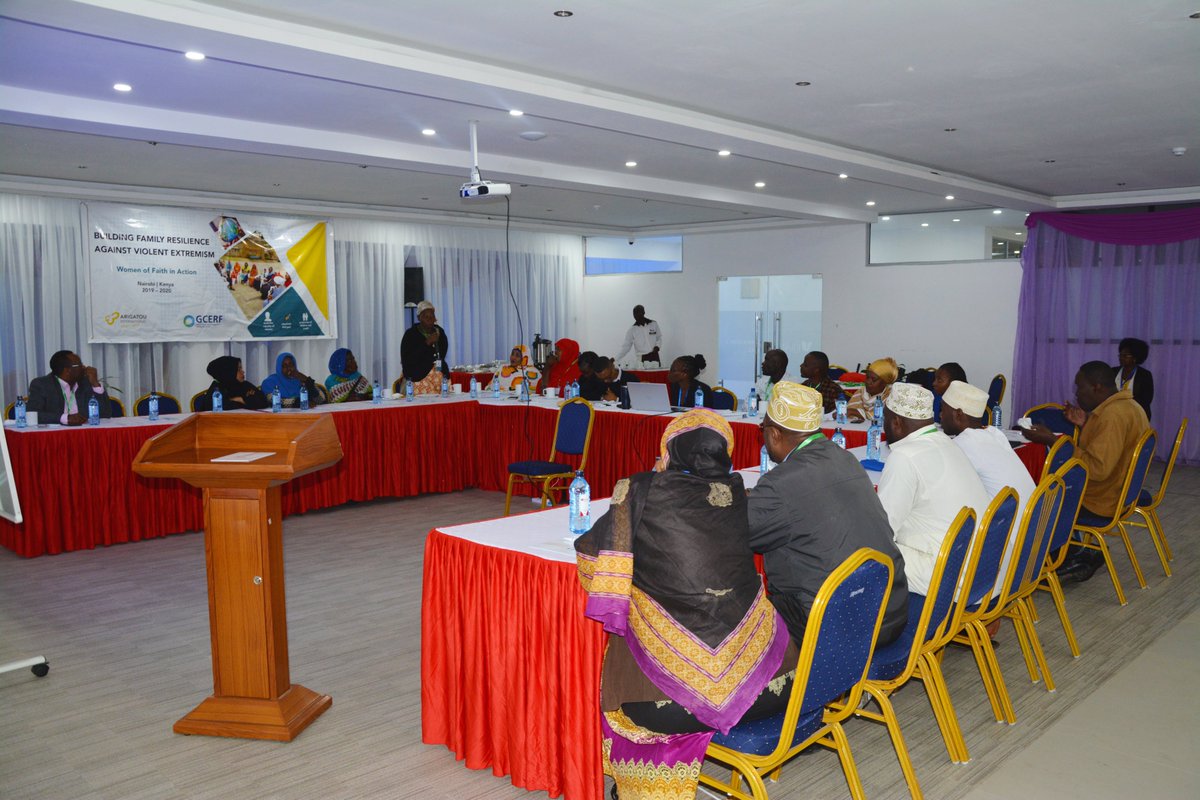 Kenya’s peace and security landscape is characterized by conflict drivers, including ethno-political competition for power, poverty and youth unemployment, and has pushed or pulled vulnerable youth and children into violent extremist groups. The situation is further exacerbated by regional instability and attendant problems like trafficking of small arms through the vast porous borders. Children and young people have become the easiest targets for radicalization into violent extremism. Children and youth are the most vulnerable victims, not to mention those who have been recruited as child soldiers to fight in the wars and conflicts.

It is in this line that Arigatou International–Nairobi in partnership with the Global Community Engagement and Resilience Fund (GCERF) formally launched the, “Building Family Resilience: Women of Faith in Action,” project on 17th October 2019 in Pumwani, Nairobi, Kenya. A total of 22 participants attended the meeting including senior religious leaders from the Christian and Muslim communities, representatives from the security agencies, County Government of Nairobi, community organizations, and local leaders.

The Family Resilience project seeks to actively involve women working or living in informal settlements of Nairobi and Mombasa in Preventing Violent Extremism (PVE) by building their capacity to educate children and young people against radicalization into violent extremism. The women/mothers from different faith backgrounds will be provided with training on the nature of violent extremism and its prevention. The project further instills entrepreneurship and leadership skills to the women as part of the broader objective of enhancing local independence. 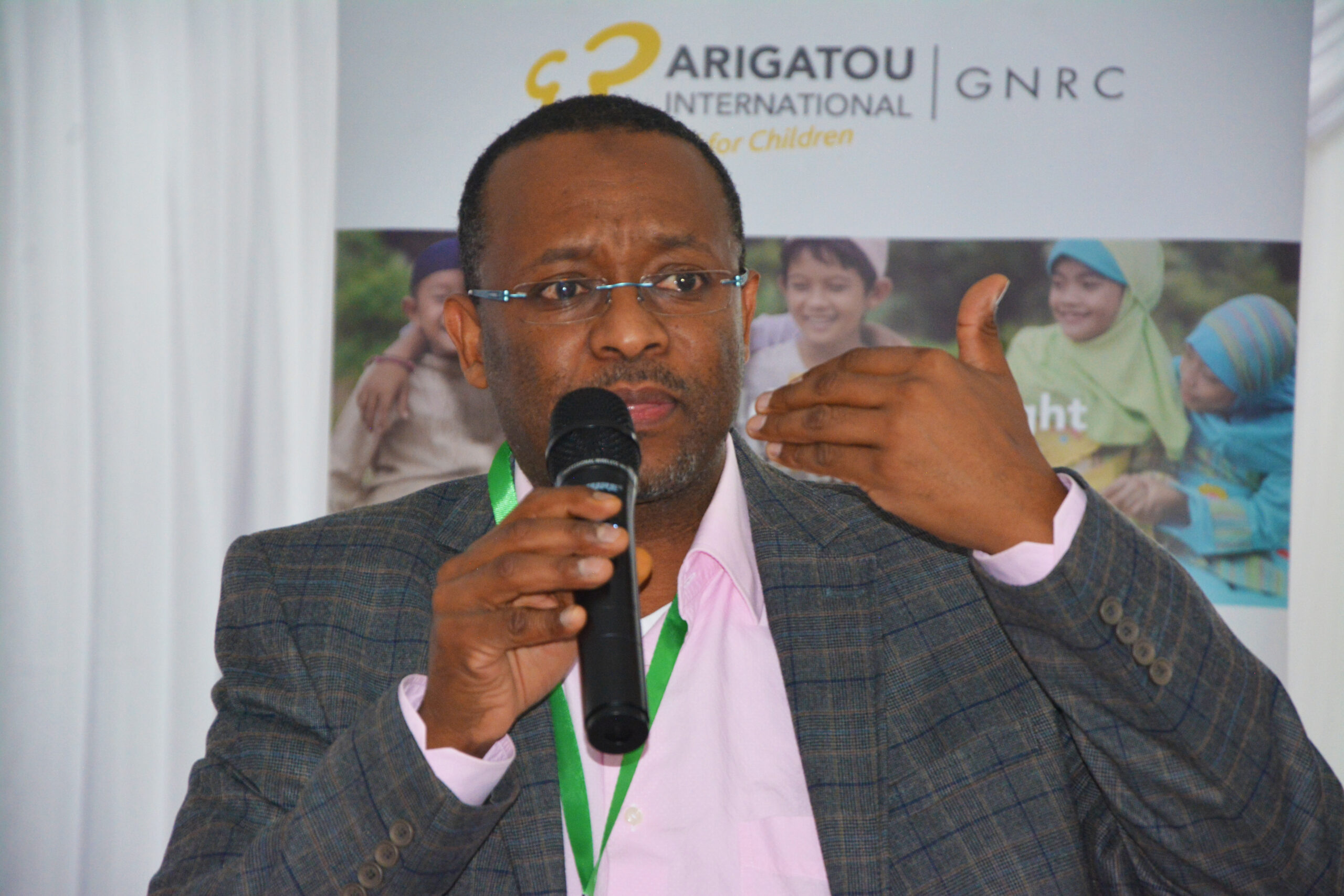 In his opening remarks, the GNRC Secretary General, Dr. Mustafa Y. Ali, indicated the importance of building women’s capacity on matters peace building and sustainable development. He added that mothers present a missing link in preventing violent extremism. “Their unparalleled physical and emotional proximity makes them witnesses of every stage in their child’s development. From shaping attitudes towards non-violence to serving as “front line” actors in identifying signs of possible radicalization to violence prevention, women’s role cannot be ignored,” he noted. Dr. Ali pointed out 4 key factors that help entrench the context of violent extremism: Ignorance, Fear, Hate and Greed. “I urge you not to fear confronting Violent Extremism. We have to be brave!” he added.

The GNRC Network and Programs Coordinator, Dr. Dorcas Kiplagat, shared Arigatou International’s commitment to better the lives and dignity of children and youth including empowering the community, and mothers especially, to protect and raise children in a positive manner. She explained that through the project, Arigatou International would promote the well-being of children and young people by drawing on universal principles of common good to offer compelling new ways for people of diverse religious and cultural backgrounds to come together to address children’s issues. Dr. Kiplagat highlighted that the GNRC encourages and welcomes institutions to adopt the Panama Declaration on Ending Violence Against Children. The 10 Panama Commitments aim to promote and eradicate any form of violence against children.

GNRC member, Ms. Cindy Owuor, gave an in-depth description about the Family Resilience Project including supporting activities, focus beneficiaries and reach, and expected results of the project. She added that the pilot project would be implemented in Pumwani and Kisauni areas of Nairobi and Mombasa counties respectively, with an intention to replicate the project nationwide based on positive outcomes. In her presentation, she explained the conflict situations in the East and Horn of Africa and how young people and children are used as tools to commit atrocities in the society. Participants agreed that once violence taps into the minds of children and young people, it impacts their psychological and emotional behaviors.

It was noted in the meeting that women and mothers have the potential to intervene if necessary when it comes to preventing violent extremism but they often lack the essential knowledge and self-confidence to recognize and address the early warning signs of radicalization in their children. Arigatou International, through the project has sought to fill this gap, to ensure sustainable development.

Religious leader, Sh. Masood Mwachozi from Pumwani, emphasized the need to involve all community stakeholders including faith leaders, women, parents, local leaders, youth and children in the project. He added that the project has a potential to promote coexistence, equity, respect, forgiveness, tolerance and a bright future for children and youth.

Profiling of people due to their religious orientation was cited as one of the hindrance of peace building. The Internet specifically the social media has been a powerful tool for preventing and promoting extremism. It was noted that violent extremists have perfected the art of using online technology with their targets being the young generations. Thus participants were urged to develop counter-messages and narratives against the violent extremist narratives. Arigatou International presented some of the successful counter-narratives it has developed over the years through interfaith and professional partnerships. 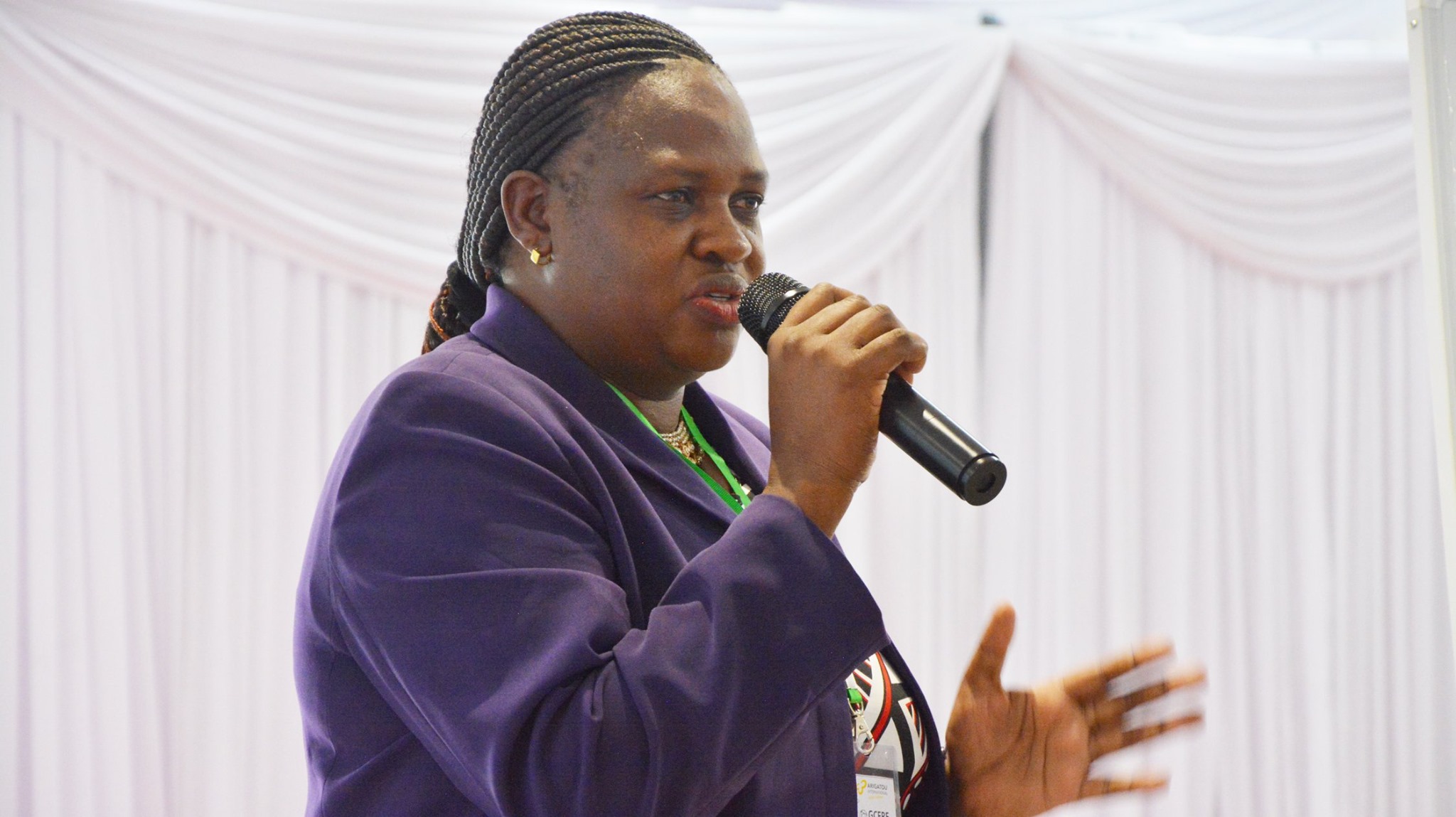 The Officer Commanding Police Station, Shauri Moyo, Mrs. Alice Jemutai, appealed to the sanctity of participants to be their ‘own brothers keeper’ and report any form of misconduct. He welcomed members to engage with his office anytime in regards to peace and development initiatives. 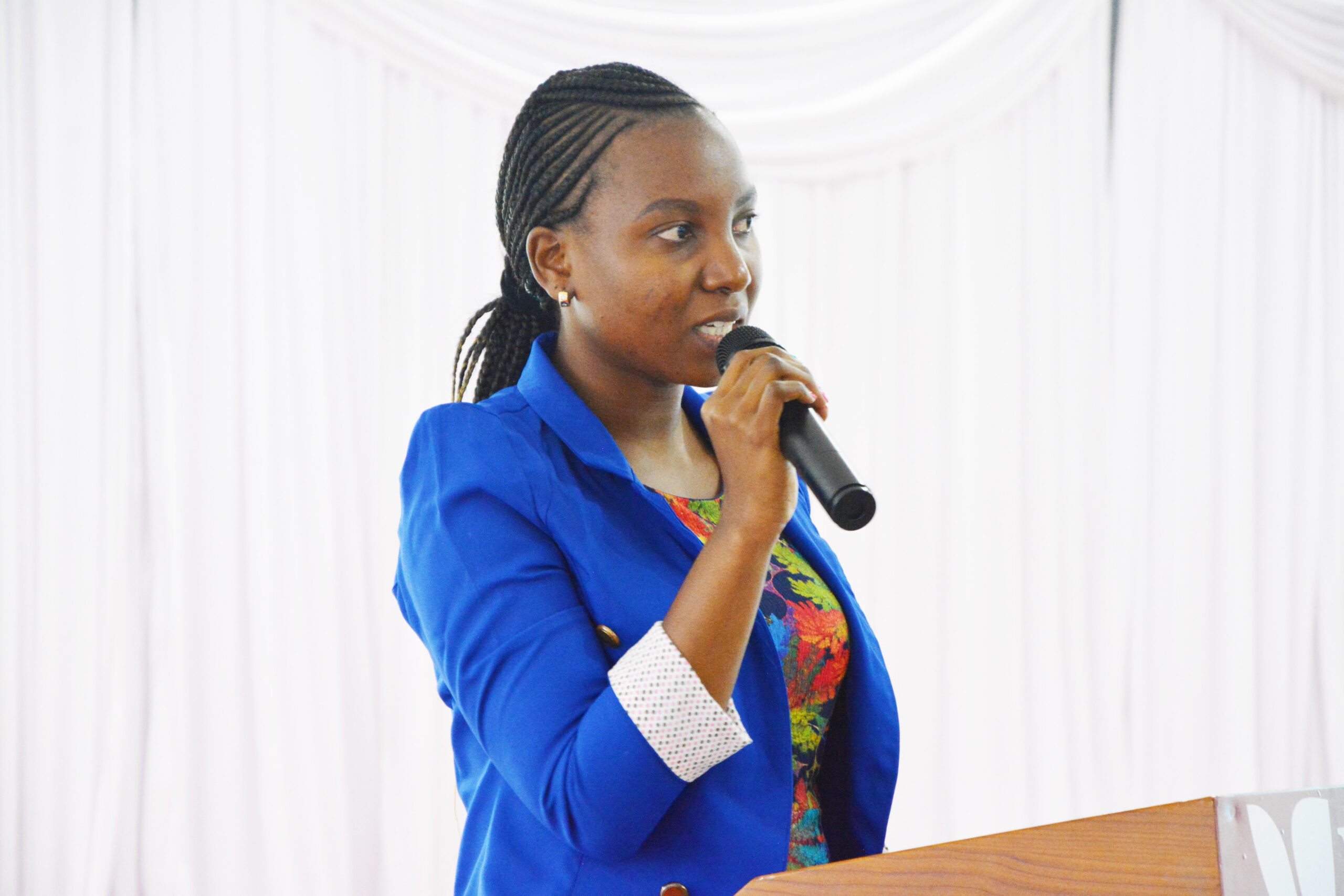 The representative from the National Counter Terrorism Center (NCTC), Ms. Esther Tsuma, appreciated Arigatou International’s work in preventing curb violent extremism with a focus on community engagement and family empowerment. She noted that faith communities have a lot of power and authority when it comes to peace building and cohesion. She reassured the government’s willingness to work with the community and in building the capacity of each and everyone towards inclusivity. 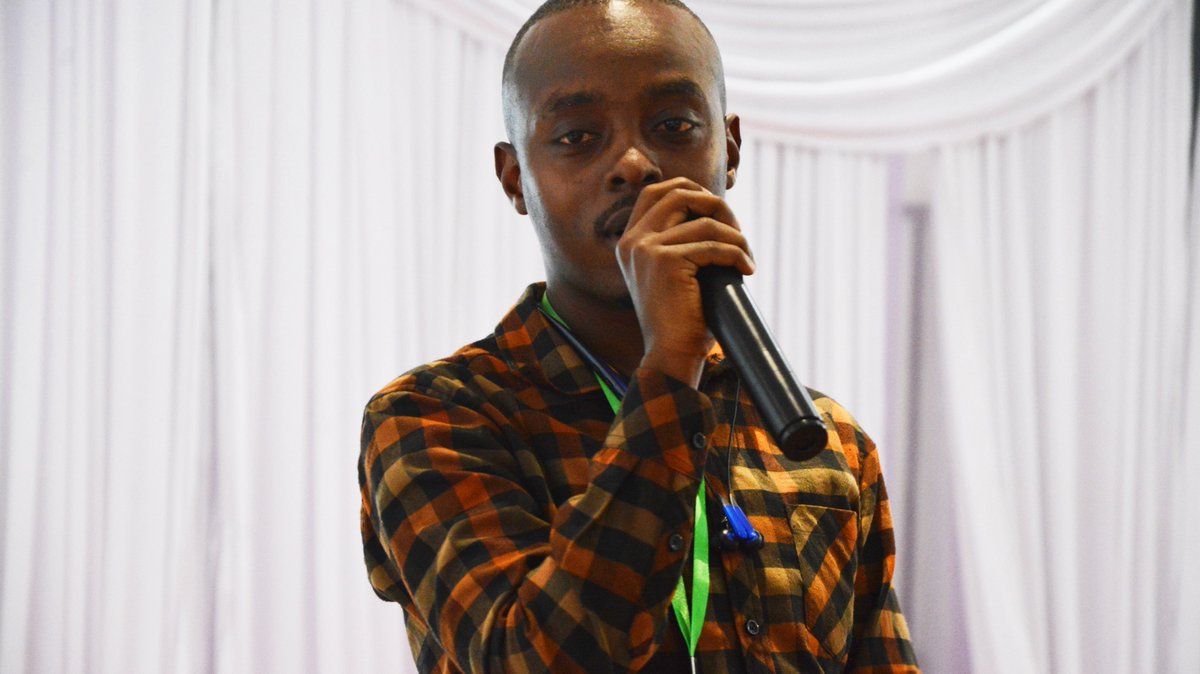 Mr. Salim Juma a youth representative gave a personal encounter as a youth, of the factors that make youth targets of radicalization and violent extremism. One major factor he highlighted was the amount of conflicts that happen within families. Conflicts lead to destabilization within the family unit, which later provide an avenue for recruiters to take advantage of children and young people. He explained of cases where single mothers or single fathers abandon and neglect their children failing to provide attention, love and a platform to which a child feels appreciated and respected. Extremists then tap into this to their advantage, misleading young people and children with a promise to be appreciated and respected upon doing certain violent acts in the community. He added that the youth lack platforms to engage and express themselves hence resulting to vulnerability into violent extremism.

The Ward representative for Kamukunji Sub-county, Mr. Christopher Munyoki, shared the government’s progress in curbing violent extremism in the area including establishing community policing network, encouraging competence among community members and encouraging them to speak out among others. He addressed the ongoing construction of social halls that the county government has undertaken in Pumwani, which aims to bring youth together for social projects. “This will be a platform in which young people will get to share their ideas on different developmental projects,” he stated. He added that setting up of sport structures and activities is also one of the mandates of the county government in minimizing idleness within the youth in the community.

Ms. Maimuna Hassan, a leader from KACPEN (Kamukunji Community Peace Network) pointed out some factors that are currently leading their children to be radicalized into violent extremism including; parental failure, negative peer pressure, idleness among the youth, and religious misinterpretation. She recommended some solutions to prevent the scourge of violent extremism in the area:

The forum concluded with a group photo symbolizing the officiating of the project. Dr. Ali welcoming people to work and encourage each other towards their personal awareness and growth. “Let us walk the talk. That’s what we can do together, let us walk together to fulfil it,” he remarked.