From 27 to 29 October 2014, the fourth GNRC Regional Meeting for Latin America and the Caribbean took place in El Salvador.
The meeting brought together more than 35 GNRC coordinators, contact persons and youth members from 10 countries of the Region: Argentina, Brasil, Chile, Colombia, Cuba, Dominican Republic, Ecuador, El Salvador, Guatemala and Panama, as well as staff from the GNRC Secretariat in Nairobi,  Arigatou International Offices in Geneva and New York, and the Arigatou International Secretary General from the international headquarters in Japan.

From 27 to 29 October 2014, the fourth GNRC Regional Meeting for Latin America and the Caribbean took place in El Salvador. 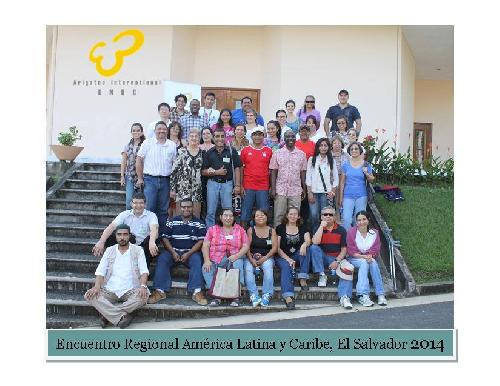 The meeting took place at the Salesian retreat centre of Ayagualo, close to the capital city of San Salvador. The centre of Ayagualo was one of the places where the negotiations for the peace agreement took place during the civil war which struck the country for aproximately 30 years. El Salvador is also the place where bishop Oscar Romero of the Catholic Church in El Salvador was assassinated while offering Mass in 1980, for speaking out against poverty, social injustice, assassinations and torture.

The main objectives of the meeting were: To provide a consultation platform where GNRC members could engage in face-to-face exchanges of best practices and lessons learnt with other members, and to appraise members/coordinators in the Region of the new GNRC structure and the workings of the new secretariat in Nairobi.

The three-day meeting was organized in eight sessions. Each session consisted of a brief introduction on the topic, the presentation of good practices and experiences from countries in the Region, and questions and answers. 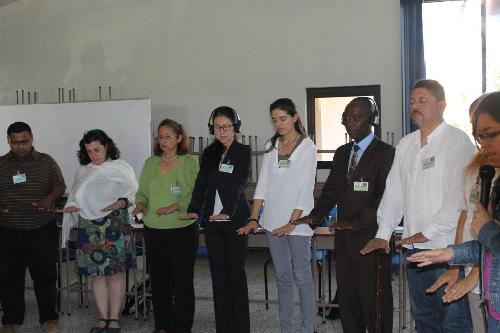 During the first session “Arigatou International and the GNRC”, Ms. Mercedes Román, GNRC-LAC Advisor, recalled that the GNRC was launched during a Global Forum in the year 2000, but started in the LAC Region in 2002 with a meeting in Buenos Aires which brought together more than 90 people from 20 countries. She briefly went through the history of the GNRC in LAC and stressed the fact that nothing would have been possible without the hard work and commitment of the many volunteers of the network.

Ms. Silvia Mazzarelli, Netowork and Programme Manager for GNRC-LAC presented the situation of the LAC Region, from a child rights perspective. She presented the basic demographic figures of the region, the main problems  that affect its population and the main violations of children’s rights.

She pointed out that LAC is a Region with many contraddictions. Despite the rapid economic development, the growth of the middle class and the decrease of the poverty rate, it is the most inequal region of the world, with a Gini coefficient of 0,52 (2011-2012).

Among the major problems that affect children in the region, she mentioned: birth registration, violence against children and adolescent pregnancies. It’s the only region in the world where the number of girls under the age of 15 who give birth is increasing and is expected to continue to rise until 2030. 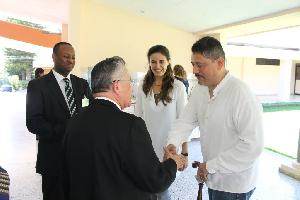 Dr. Mustafa Y. Ali briefly described the new structure of the GNRC Secretariat and how GNRC is linked to the other Arigatou International initiatives: the Ethics Education Programme, the World Day of Prayer and Action Movement and the Interfaith Initiative to End Child Poverty. Coordinators reflected on the challenges they face in strengthening the networks in the countries and they agreed upon the importance of formalizing the participation of organizations in the GNRC, through membership agreements, for a stronger sustainability.

The second session was entirely devoted to the “Learning to Live Together” programme. Ms. Ornella Barros, from the Arigatou Office in Geneva, introduced the session. Then experiences in implementing the programme were presented by representatives of Brazil, El Salvador and Ecuador. Each country has a very unique experience: Brazil is implementing the programme with families, El Salvador is using it to prevent gang violence and youth violence in communities (non formal settings) and Ecuador in implementing it in the formal education system.

It must be said that in the LAC region, ethics education is at the very heart of the work of the GNRC. It is through ethics education that poverty issues are tackled; ethics education is a key strategy to prevent violence against children and bullying; it has also been used to work on discrimination and exclusion of vulnerable groups, or to promote birth registration. The session concluded with an acknowledgement of the importance of monitoring systematically the implementation of the programme and evaluating the impact and change it is making in the lives of the children. 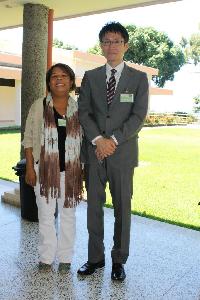 The third session focused on the Interfaith Initiative to End Child Poverty. Mr. Nyabera, director of the IIECP presented the initiative, then experiences from Colombia and Chile were presented. Participants pointed out the strong focus on climate change and environment and that both initiative have been implemented together with the ethics education programme. In fact, ethics education has been used as entry point to raise awareness in communities on the causes and consecuences of poverty and to motivate young people and community leaders to take action to overcome one or more of these causes.

The second day started with a session on the Wold Day of Prayer and Action for Children (DPAC). Ms. Masue Suzuki presented the DPAC movement, then good practices from Brazil, Dominican Republic and Cuba were presented. In the Dominican Republic, the main achievement has been to link DPAC with advocacy processes on violence against children. The GNRC has managed to involve religious leaders in the design of a national roadmap for the follow-up to the recommendations of the UN Study on Violence against Children. The process is led by the Government and supported by UNICEF and the Civil Society.

Brazil and Cuba have been celebrating DPAC throughout the entire country. This has been possible thanks to the mobilization of many volunteers and partner organizations. It certainly is a model for other countries.
The Child Protection Specialist from UNICEF El Salvador joined the group for the session. This was a great opportunity to discuss the importance of strengthening the partnership between GNRC and UNICEF.
Participants had the opportunity to analyze the importance of building strong partnerships in the countries for a more effective and efficient implementation of the initiatives, programmes and projects. 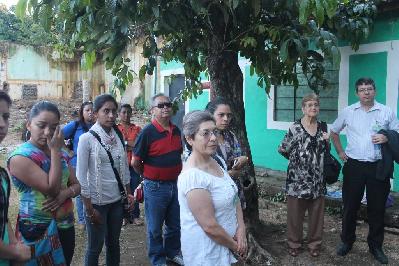 The sixth session focused on “promoting youth participation in the GNRC”. Ms. Miriam Rubino made an introductory presentation of GNRC Youth, its origins and how it has developed and evolved during the years. Then young boys and girls from Ecuador, El Salvador, Colombia and Guatemala shared their experiences as youths from the Region, collaborating with the GNRC. This was one of the most inspiring sessions. It was great to hear about their creative ideas and suggestions.

In the afternoon, the participants visited the communities where the Ethics Education Programme is being implemented: the indiginous communities of Izalco and Soyapango, Santa Ana and Popotlán. During the visit, participants had the opportunity to try “pupusas”, a typical Salvadorian dish.

The last day was centred on “the New GNRC”, the restructuring process and the strategic plan. Dr. Ali presented the new guidelines of the GNRC and explained the role and responsibilities of GNRC staff. The GNRC programme cycle, tools and templates for the financial and narrative reporting were also presented. 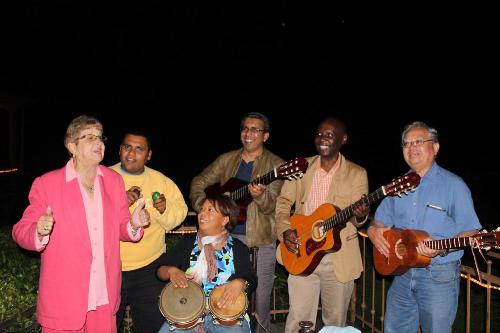 The three-day meeting ended with a delicious dinner at a restaurant with a beautiful view of the city of San Salvador. A few special guests joined the group for the dinner: the Minister of Security, representatives of the Bahai Faith, The Bishop of the Methodist Church and the Bishop of the Episcopal Anglican Church.  During the dinner, participants also thanked Ms. Román for all the years she spent as GNRC Coordinator in the Region.