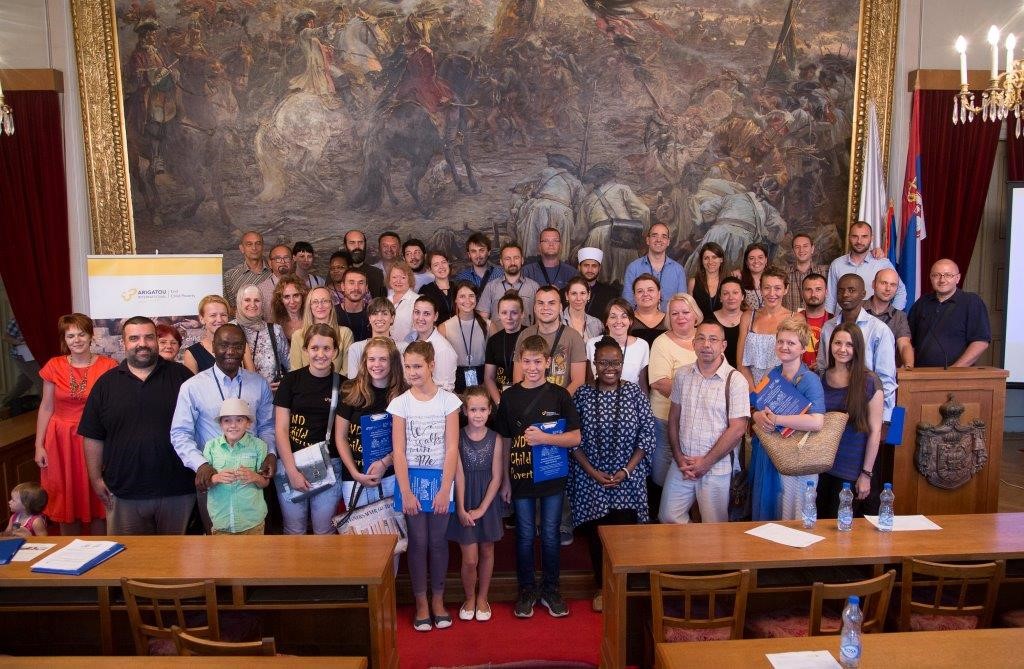 Arigatou International’s Interfaith Initiative to End Child Poverty (End Child Poverty) and The Global Network of Religions for Children (GNRC) in collaboration with the Somborski Edukativni Centar (SEC) co-hosted a Round Table at the Sombor Municipal Hall, Serbia on 28th July 2016.

The event entitled ‘Faith Communities Partnering Towards Ending Child Poverty and Violence against Children’ focused on the link between child poverty and violence against children and role of faith communities and children in aligning ending child poverty actions to the Sustainable Development Goals (SDGs). It also highlighted ways that children experience poverty and the patterns of poverty across the Balkans as well as the common drivers of poverty. In addition, the meeting addressed challenges of child poverty, while simultaneously providing new sustainable pathways.

Mr. Srđan Vlaškalić, Executive Director of the Somborski Edukativni Centar (SEC) , the moderator of the session, set the tone by welcoming the participants and setting the context of the Round Table. He then invited Mr. Antonio Ratković, the Deputy Mayor of Sombor City to officially open the meeting. In his remarks the Deputy Mayor welcomed the idea of a faith-inspired process towards ending child poverty and violence against children, as well as expressed his wish that the reflections would be followed by concrete actions.

Rev. Fred Nyabera, Director, End Child Poverty–Arigatou International, shared an overview of Arigatou International and its initiatives. He highlighted the importance of working together to end poverty and violence against children. “We are fully aware of the importance of working together, with various stakeholders, as well as children and young people. As a faith inspired organization, we realize the importance of riding on each other’s strength towards catalyzing change… Such partnership should provide a platform to learn from each other’s experience, and foster concrete and measurable results. Together we can end child poverty and violence against children”, he said.

Mr. Saša Stefanović, President of the Network of Organisations for Children of Serbia-MODS, referred to the importance of addressing violence against children. He further highlighted the need for data, and recalled the creation of a national framework to measure social impact within the Balkans, as well as the issuing of legislation to protect children from different forms of violence. “While there are many laws and policies in place to target child poverty, as well as violence against children, not enough is being done at a local level to respond to the needs and fulfil the rights of all children”, he said. He further called for data collection, monitoring and evaluation as well as action plans focusing on addressing child poverty at local, municipal and national levels.

Ms. Emma Grindulis, Advocacy and Parliamentary Officer, Eurochild, called attention to the historic opportunity provided by the SDGs towards ending child poverty and violence against children. “Faith based communities can use the SDGs to accelerate a child rights-based approach to ending child poverty”, she emphasized.

Mr. Stephen Katende, Local Level Advocacy Learning Hub Lead / Development, Learning, and Impact / MEERO, from World Vision Bosnia and Herzegovina, remarked on why putting an end to violence against children is so important and urgent, and highlighted the staggering statistics that amplify the dire state of children living in poverty and violent situations in the Balkan countries. He lauded the faith led initiative but urged the faith communities to do more by maximizing on their comparative advantage to mobilize their constituencies towards policy and social change and citizens participations in the municipal legislation and the delivery of social services.

Fr. Srđan Nešić, Priest at the Church of St. John the Baptist in Sombor; Mr. Igor Jakobfi from Beli Manastir, a representative of the Catholic Religious Community in Sombor; and Effendi Veton Zorjani representative of the Muslim community in Vojvodina; all referred to the importance of commitments from faith communities to preventive and responsive actions to tackle child poverty and violence against children. They highlighted the strategies that are being implemented within their respective faith communities to address these issues, including the use of faith inspired resources and tools such as sacred texts, worship spaces, advocacy for policy and social change and practical action and support to the economically dis advantaged.

Mr. Aleksandar Trudić, Youth worker, SEC expounded on his practical experiences working with the youth and regretted the lack of personal and collective sense of responsibility among most youth as citizens. He praised SEC for having achieved what many other organizations had failed to do in regard to youth mobilization and action.

Ms. Tanja Marović, from the Foundation SOS Children’s Village Serbia, provided examples of pragmatic actions that are being effectively implemented by SOS Villages across Serbia, to end child poverty and violence against children. SOS works with foster families, specifically women caregivers who provide nurturing care to 5-6 children at a time. Despite the inadequate presence of a father-figure in the children’s upbringing, Tanja saw this as a viable option due to its sustainability. The women involved are volunteers who have offered themselves as a form of service to humanity.

The call for child participation in mitigating child poverty and violence against children was a common thread throughout the deliberations. This was practically exemplified in the creative participation of the children from SEC through documentaries and the sharing of their reflections on the Round Table themes. The children described exclusion as a form of poverty and violence and called on adults to do more to protect children and provide for their needs.

A common thread through the meeting were the need for gathering evidence, supporting national plans of actions, doing global advocacy, raising awareness, enabling legislative frameworks and creating a social movement to end child poverty and violence against children.

The Round Table was preceded by a two-day workshop to socialize the Multi – Faith Resource Guide on Ending Child Poverty- a Resource Guide intended to serve as a model for faith communities to engage in year-round child poverty spiritual reflection, advocacy and action. In addition, the workshop reflected on the link between poverty and violence against children – as a precursor to the Global Network of Religions for Children (GNRC) 5th Forum. The GNRC 5th Forum, themed, “Transformed Faith Communities: Ending Violence Against Children”, will take place in May 2017, Panama City, Panama. Speaking at the workshop Dr Dorcas Kiplagat, the GNRC Network and Programs Coordinator, said that such spaces provide the opportunity to learn from each other’s experiences, build personal and working relationships among participants and subsequently strengthens the GNRC.

About seventy (70) participants from 10 countries and from various faiths and religions, the Global Network of Religions for Children (GNRC) members from the Balkan countries, development organizations, civil society organizations, Sombor Municipal representatives, media and multilateral organizations participated at the Round Table.