Building a Better Environment for Children and Youth in Zanzibar 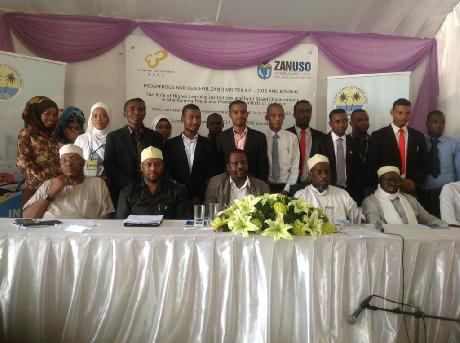 One hundred and fifty (150) youth gathered at the Hall of Institute of Kiswahili and Foreign Languages in Zanzibar on November 30, 2014 to participate in a public lecture themed “The Role of Higher Learning Institutions and Faith Based Organizations in maintaining Peace and Preventing Conflicts in Zanzibar”. The Public Lecture commenced with a prayer officiated by the Secretary of the Office of Mufti, Sheikh Fadhil Soraga.

In his introductory remarks, Dr. Hafidh, the GNRC Zanzibar Coordinator welcomed the gathering and introduced the theme of the Public Lecture as well as the high table panel. He explained that this is a commencement of a series of similar programs. He called on the youth present to recognize their responsibility and ability to direct their energies for good for a peaceful and prosperous Zanzibar in 2015 and beyond.

Sheikh AbubakarUmoja wa Serikali za Wanafunzi Zanzibar (USEWAZA) representing Pre tertiary schools actively participated in the lecture through an interactive participatory theatre that addressed the theme and allowed for the concerns of their peers to be aired through staged drama pieces.

Sheikh Abubakar Francis took to the podium to address the topic “Education in Islam.” In his brief remarks he highlighted that in Islam, all works of man should be worship to Allah – further elaborating that there are three types of education; Physical, Intellectual and Spiritual – all interlinked. His remarks were to inspire and encourage the youth present to seek knowledge comprehensively citing former Muslim scholars and scientists such as Ibnu Khaldun, Mohammed Bin Mussa, Ali bin Jabir (Algorithm) and Ave Sina as role models.

Dr. Mustafa Y. Ali, GNRC Secretary GeneralDr. Mustafa Y. Ali, Secretary General, Global Network of Religions for Children, addressed the “Causes and Consequences of Radicalization among the youth: The Role of Higher Learning Youth Groups and FBOs in reducing the Negative Radicalization.”His address highlighted the principles of pluralism contained in Islam firmly calling for all to reject the misuse of religion to advance any form of violence and exclusion. Recognizing that, to address violent extremism a holistic approach must be employed – he called on the youth to revert to the Charter of Medina, which respected mutual rights of all residents (Muslims and Non Muslims) and restore the light that shone over 14 centuries ago.

Addressing “Peace and Stability for Prosperity: Importance of Tolerance and Reconciliation from an Islamic Perspective”. Sheikh Ibrahim Lethome, a GNRC member from Kenya and also member of the Friends of Zanzibar (FOZ) brought to light the reality in part of Kenya where worshippers are forced to undergo security screening before entering their own places of worship. He reminded the gathering that Islam tells us not to compel but rather convince others to join. He indicated that one of the basic principles of Islam is that one’s relationship with other human beings – not only Muslims – counts a lot on one’s piety. To conclude, Sheikh Lethome summarized that the solution to peace is for each to follow God’s teaching.

Thereafter, the youth had an opportunity to ask questions to the panelists and the questions indicated that the youth were really paying attention and touched by the presentations made by the speakers. 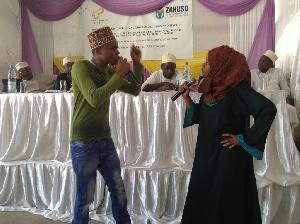 USEWAZA participatory theatre on the themeBoth Sheikh Soraga and Sheikh Talib in their closing remarks concluded by reminding and emphasizing that peace is everything. It is our responsibility to maintain and nurture peace. The Youth present thanked the organizers and speakers, and pledged to take this message to their Youth bodies and beyond.